After recapping my week-long adventure in Utah, I got inspired to tackle one of my own curb appeal projects.

And this is one of those maintenance projects you have to do as a homeowner, but you’d rather not. Especially not twice in 2.5 years!

When we remodeled my house in 2012, the handrails were brand new and stained to match my new front door. 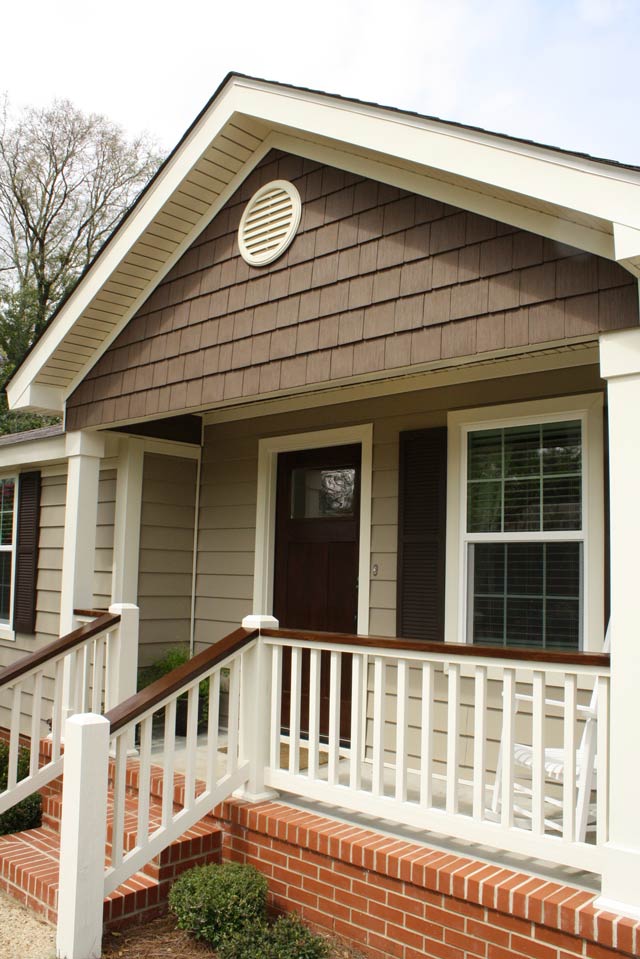 But I guess with the direction my house is facing, the sun was too much and the handrails needed to be re-stained and varnished about a year later. So I sanded, stained, and resealed them.

And here I am again 1.5 years later with the same problem! 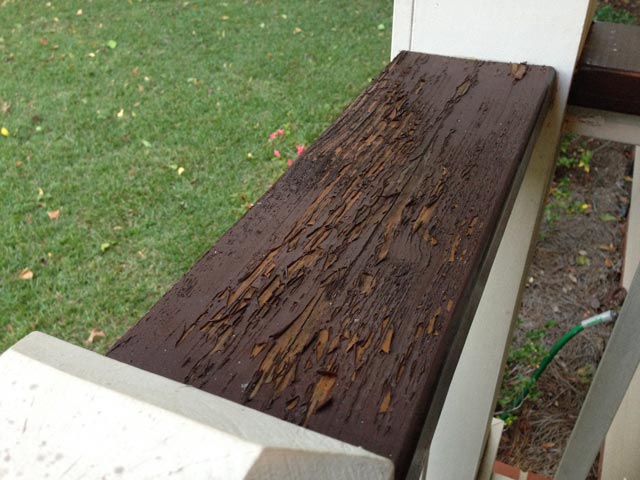 Something’s got to give! So as soon as the weather cooled down here (since you shouldn’t stain when it’s really hot so the stain doesn’t dry too fast), I set out to correct this problem again! 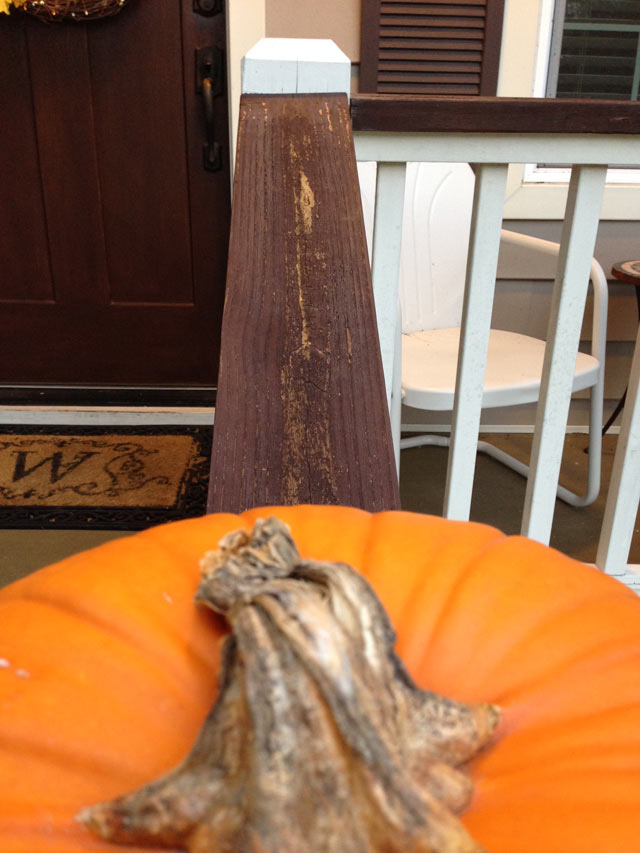 They say the definition of insanity is doing something over and over and expecting different results. So in order to prevent myself from going insane and repeating the same process a year down the road, I mixed up my strategy in repairing the handrails this time around. 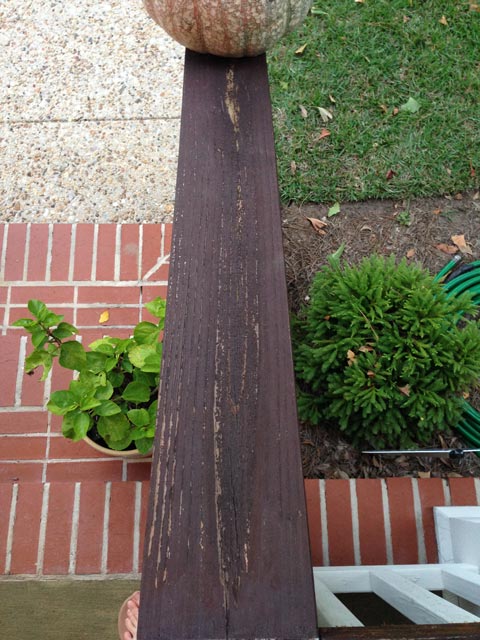 Before I could apply a fresh coat of stain, I had to sand all of the peeling pieces off. 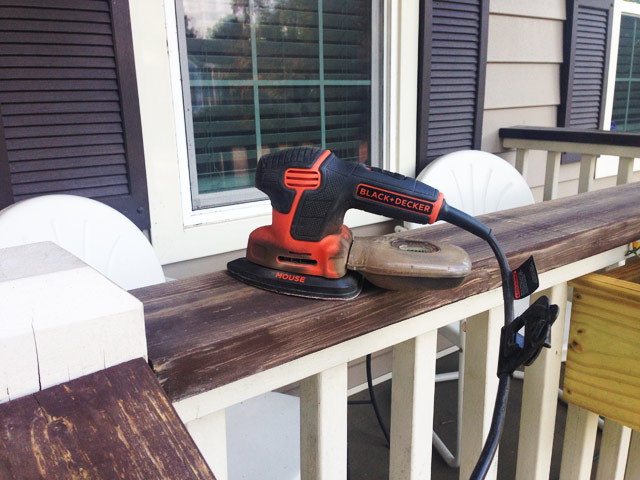 Once the peeling was gone and I wiped everything down, everywhere that met a painted surface or vinyl siding got some painter’s tape. 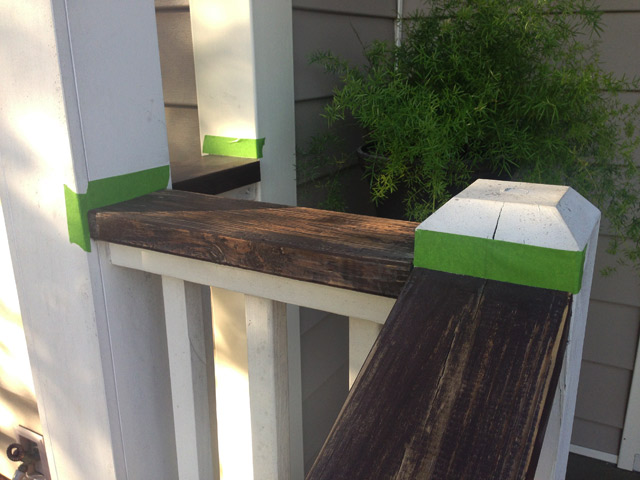 Then I was ready for the stain, a gel stain that was used for the original application. 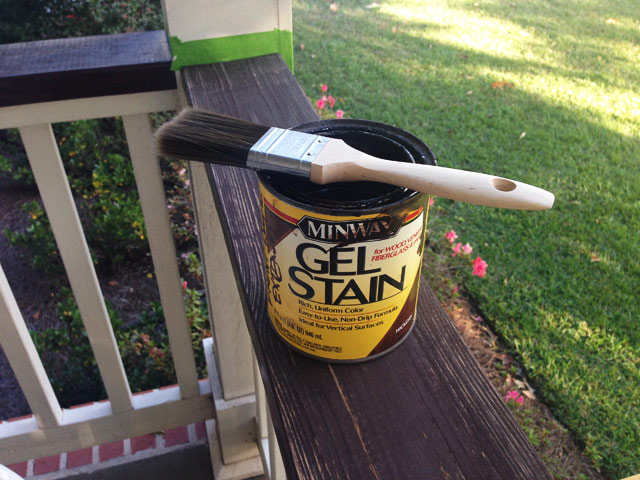 We used this stain in 2012 since I had a fiberglass front entry door. And since I wanted the door and handrails to match (and I’ve never gotten to the bottom of a stain quart), we used the same stuff on the handrails too.

You can really tell the difference where the old meets the fresh stain! 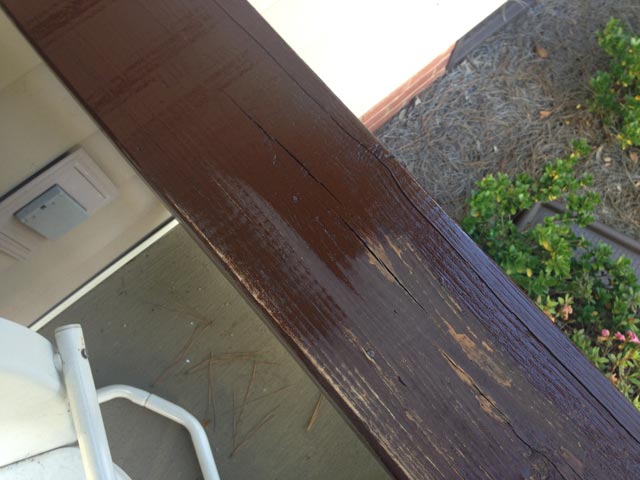 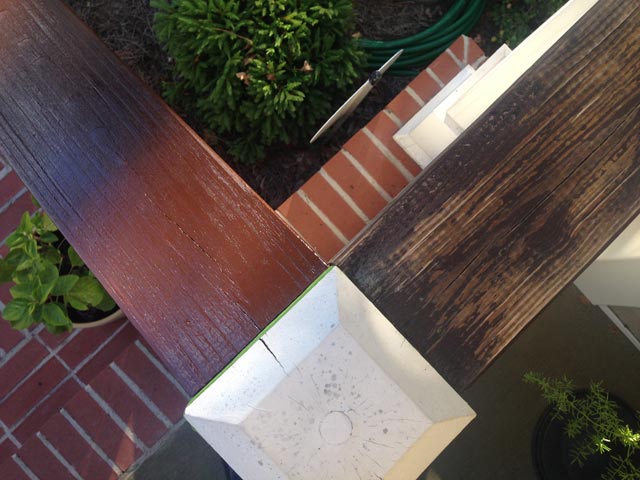 I left the stain to dry overnight before moving on to the “top coat”. And this is where I changed it up so as not to go insane. I bought marine-grade varnish, aka the stuff used on wooden boats. 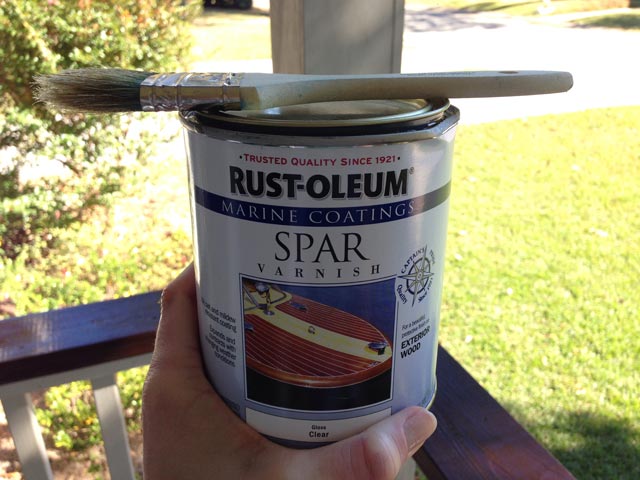 You have to think that boats get a lot of exposure to the sun, so a product made for boats must be able to stand up to the sun on my front porch…I’ll have to let you know in a year how it’s holding up!

It calls for a natural bristle brush. So I found the only one I had. 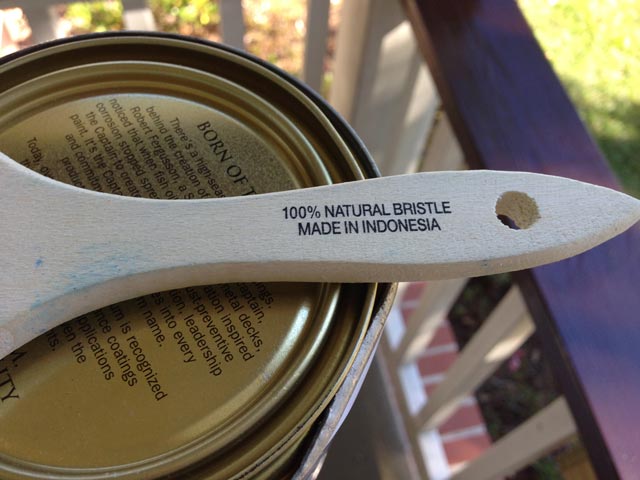 Unfortunately it was in my craft closet and didn’t look like it was in the best shape. But that just meant I wouldn’t have to clean up after I was done and I could just throw it away! 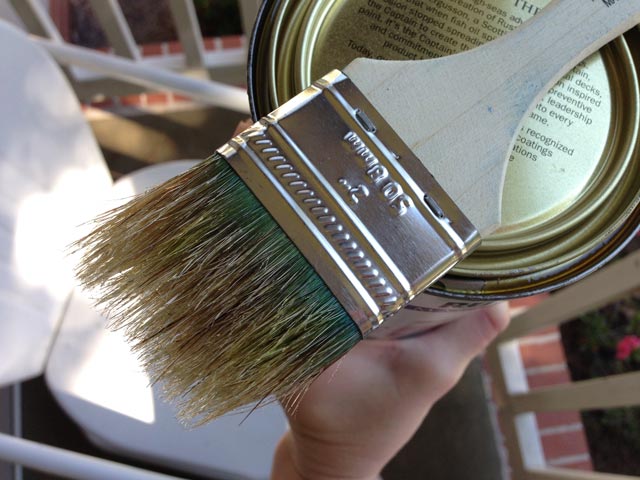 I applied it evenly over all surfaces, including the narrow sides that weren’t peeling to begin with so everything would match the new varnish’s shininess.

This is what it looked like after the first coat of varnish, a little shinier than the stain. 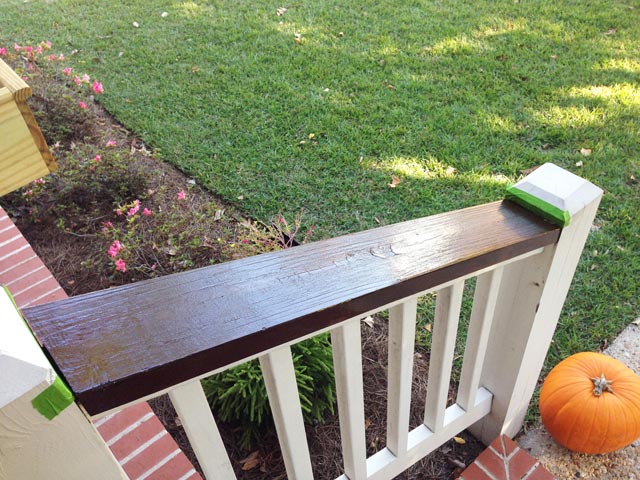 If you’re using a varnish like this, make sure to follow the directions closely! Unlike a polyurethane, you don’t have to sand between coats unless it’s been more than 12 hours. In fact, it’s preferred to do a second coat after 4 hours with 3 coats MINIMUM!

So I did my first coat, waited 4 hours and then came back for the second coat. Again veering from the last time I did this project, I applied a third coat of varnish instead of stopping at two. An extra layer of protection I guess!

And I’m loving the results! Perhaps a little shinier after 3 coats than I would have originally wanted, at least it looks fresh and new and not worn and old! 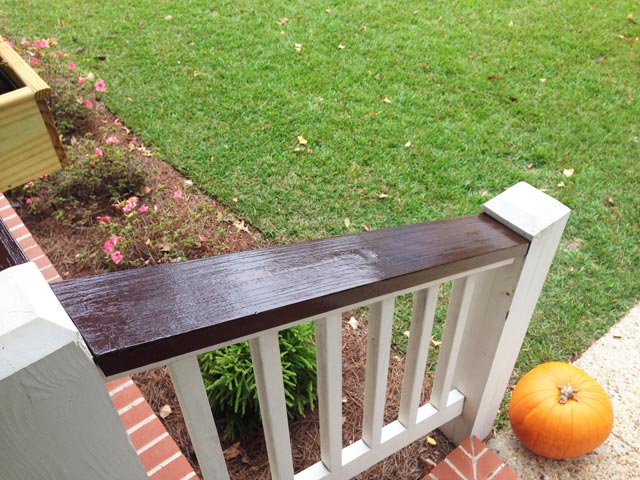 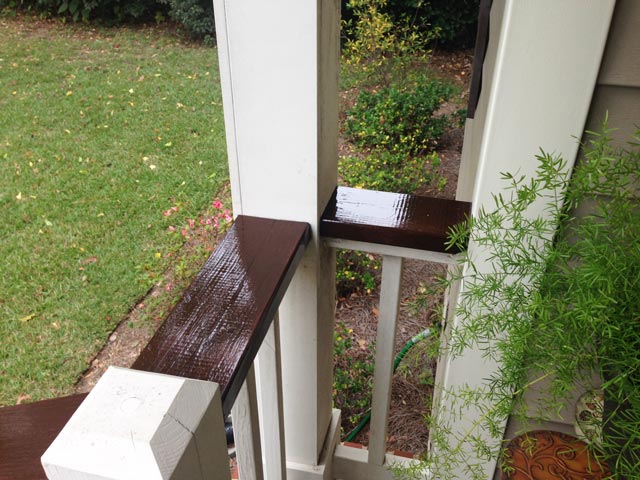 Every time I walk past the handrails to get the mail, I still feel a sense of relief like, “Whew glad I fixed that!” 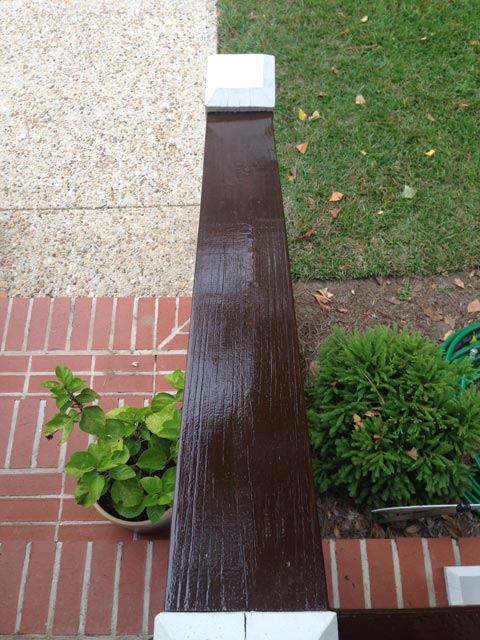 Now I can enjoy some front-porch-sitting without the constant reminder that I need to re-stain the handrails! Ahhhh! 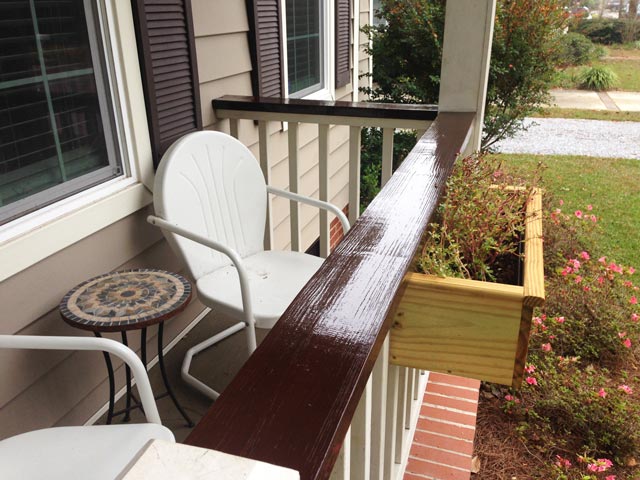 What projects are you working on now that the weather has cooled down across the country? I’d love to hear from you! Thanks for Checking In! ~Chelsea 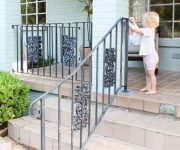 How to Update Rusty Iron Handrails

How to Refresh Your Wood Deck for a New Look

I mean😍Is that the cutest nightstand you’ve e

There’s no place like home! And that’s why cre

We’re celebrating progress over perfection over

Everyone is back in school this week, so obviously

We make our Christmas tree look short🤣Tis the s