You are here: Home / Indoor Projects / How To Hang A Cube Organizer

How to Hang a Cube Organizer on the Wall 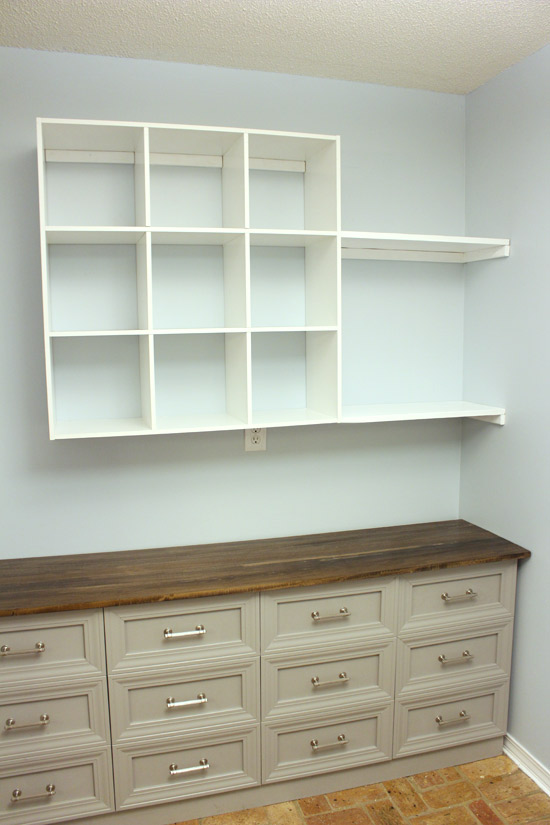 When it came to storage and organization in my laundry room project, I wanted to think outside the (cabinet) box. The plan is to put cabinets on the wall above the washer and dryer, so I thought it’d be fun to use something different on the opposite wall above the laundry sorter.

And I think that’s what I got. It’d be great in a bedroom or family room too! 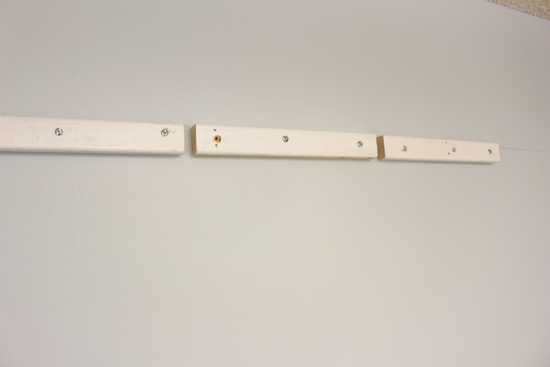 I used 1x2s cut to the width of the inside of the top 3 cubes. I primed and painted them before they were installed so I wouldn’t have to paint them in place against the new blue walls! At the same time I was also hanging cleats for 2 shelves that would fill the wall between the cubes and the right wall.

When you’re hanging the cleats for the cube organizer, make sure to leave a space between them for the vertical separator of the cube. My particular one was 1/2 inch thick, so my cleats are 1/2 inch apart from each other.

The cleats for the cubes were only 11 inches wide, which meant at most I’d be able to attach them to one stud each. So I picked up some toggle bolts* in the hardware aisle.

First I held the cleat in place and checked that it was level. Then I used a countersink bit to drill a hole through the cleat and into the drywall enough to make a mark, if not more. 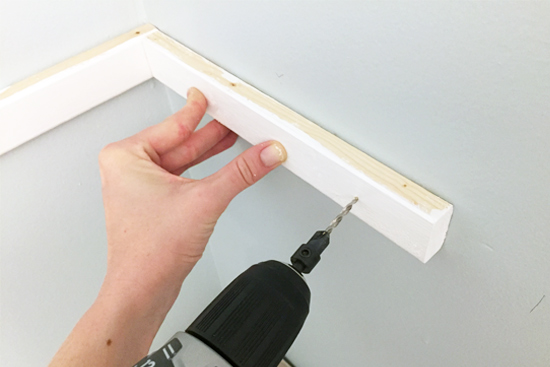 Then I set the cleat aside and used a 3/8 inch drill bit (which was called for on the box of my toggle bolts) to drill a hole in that spot on the drywall. 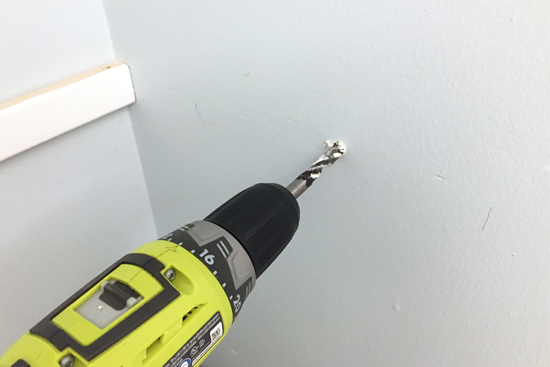 Next I put the bolt through the cleat and lightly tightened the spring-loaded anchor on the bolt on the back side of the cleat. 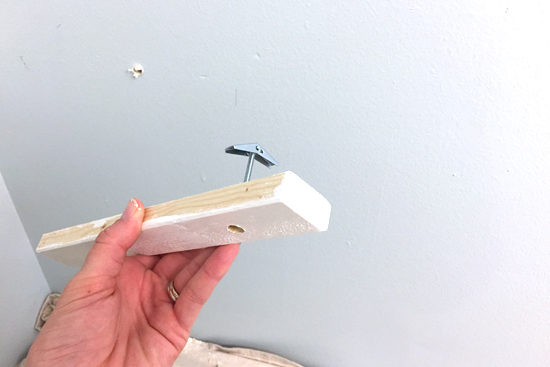 To insert it into the hole I drilled, I pinched the anchor together and used a little force to squeeze it past the drywall. I checked for level again with the bolt in place, but not tightened. 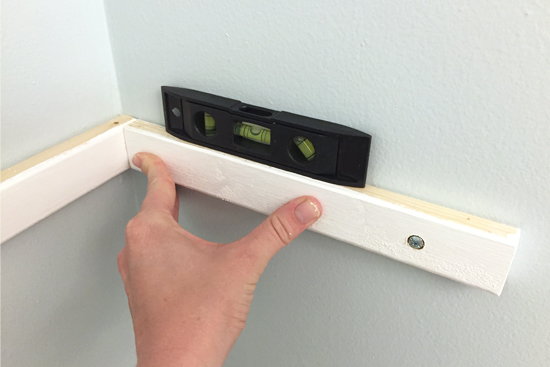 Then I was able to use my nail gun to shoot a nail or two into the studs which I had previously marked using a stud sensor. And I also tightened the toggle bolt. 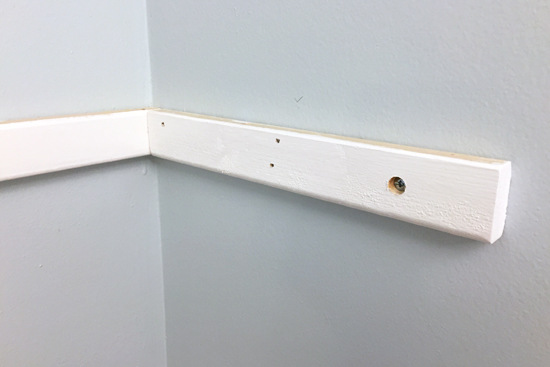 Once my 3 cleats were secure, I held the cube organizer in place on top of them and nailed some 2 inch nails down through the top of the organizer into my cleats. That held it in place enough for me to take another cleat the entire length of the whole organizer and attach it below the bottom to keep the unit from drooping and coming disassembled over time. Then I was able to nail down through the bottom cubes into that cleat and call it hung!

Of course the work wasn’t over with that! I had to cover up those large holes and screw heads. Since I used the countersink bit, the screw heads were recessed making it easy to cover them with putty. I also used some putty to cover the small heads of the nails. Then everything got a quick paint touch up. 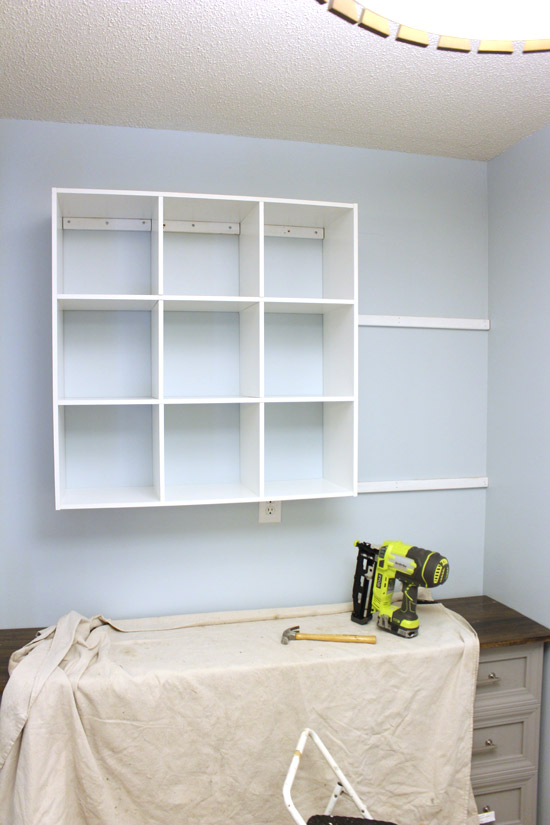 I attached the 1×12 shelves the same as the organizer by nailing down from the top into the cleats hung in the corner. The shelf boards are a little thicker than the shelves in the organizer, but for the most part they line up together and look like one unit now! 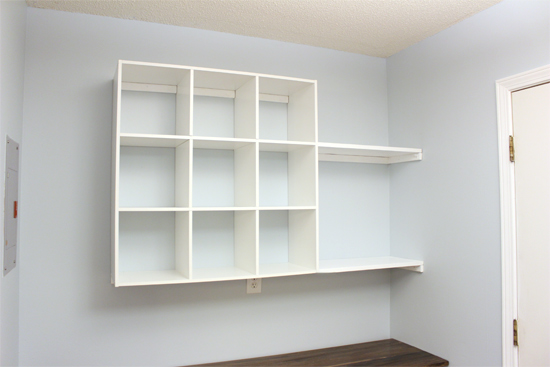 A few small nails from underneath can attach the front left side of the shelves to the cube organizer to keep them nice and tight.

Now it’s up to the family to fill the cubes and shelves with stuff! I’m thinking a few fabric boxes or baskets will look great in all of that white. What would you put in your cubes if you had storage like this? What other storage ideas have you used for a laundry room? Share in the comments below!