You are here: Home / Indoor Projects / Re(a)d All Over

As promised, I’m back with the details on painting the lattice background from my bookshelf makeover. 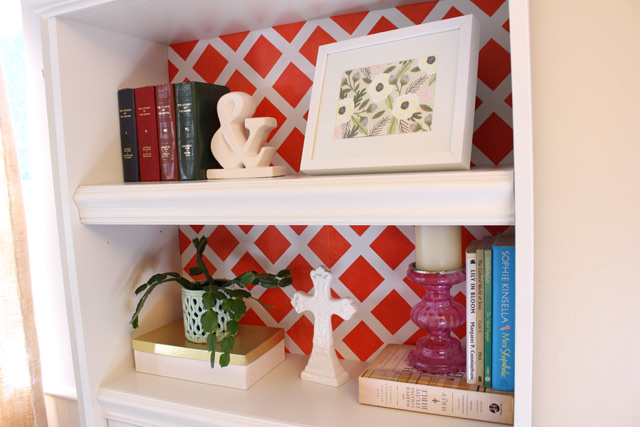 My instinct was to do a solid color, again, but then I thought I’d add a little drama to the back of the overstuffed bookshelf. After stenciling an accent wall in my living room, I thought stenciling would be the way to go to get a neat pattern.

First I set it up in my garage with some plastic behind it so I could spray paint it white. 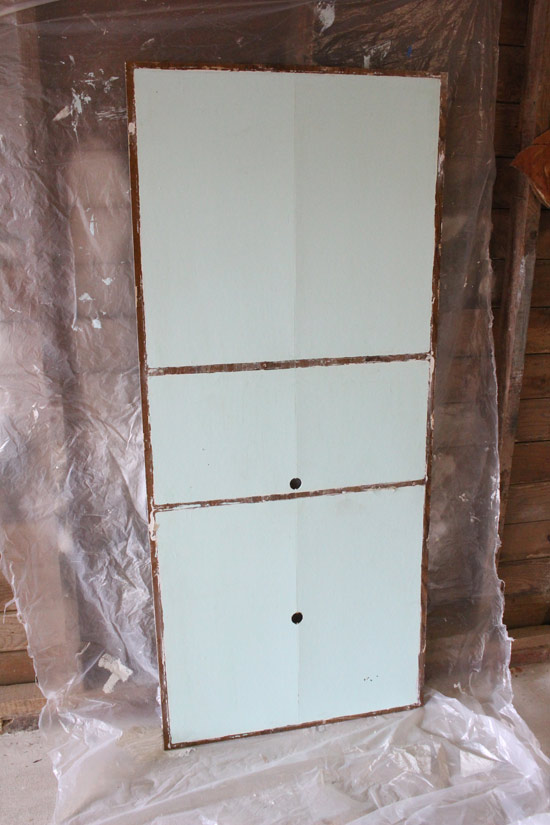 I used flat primer since I had a few cans on hand. It really only required 1 coat to cover the blue with a 2nd coat for touch ups. 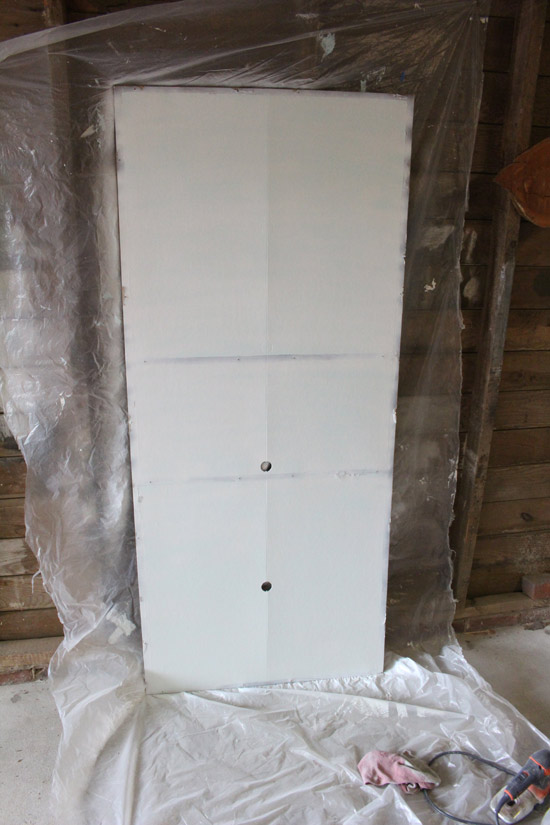 Once it dried, I picked up my supplies and set the stencil in its first spot in the corner. 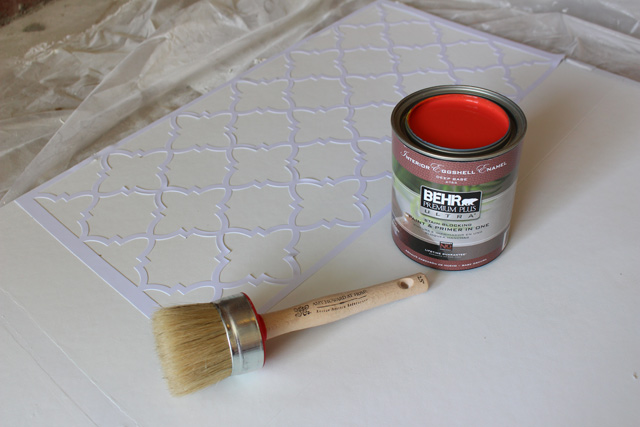 You know the saying, “You get what you pay for”? Yea, that applies here. It was a cheap stencil. And it worked cheaply. It was self-adhesive which was nice. But it was very flimsy. So after I painted the first repeat, it was nearly impossible to get the wet stencil laid out for the next repeat without messing up the wet paint on the background or without spreading paint on the next area to be stenciled.

Plus it didn’t leave clean lines either. 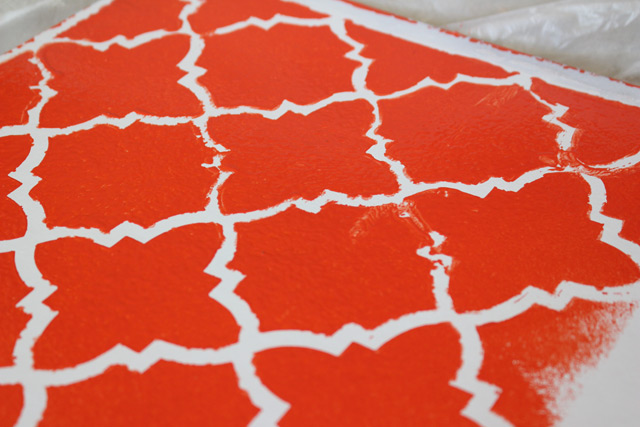 So I wiped off as much wet paint as I could and sprayed that area again with white paint. I wasn’t too concerned with the red paint showing through since only a little white would be showing in my next idea for this background.

To create the lattice pattern seen in my “after” picture above, I used 1-inch painter’s tape. I started in one corner by putting a piece of tape along the edge of my speed square. 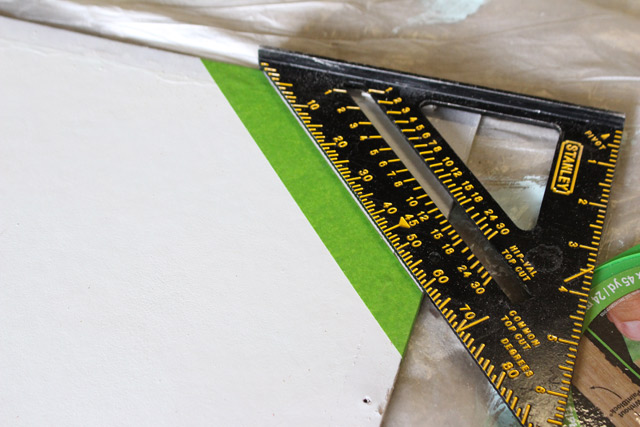 Then I went to the left of the tape and down on the right side marking every 5 inches. These would be the marks for where each new piece of tape would start. I eyeballed it as I laid my next piece of tape from one side to the other, trying to have it hit the background at the same time along the entire piece of tape. Again, I wasn’t too concerned with it being an exact straight line since I knew you’d never be able to tell once the background was in place. 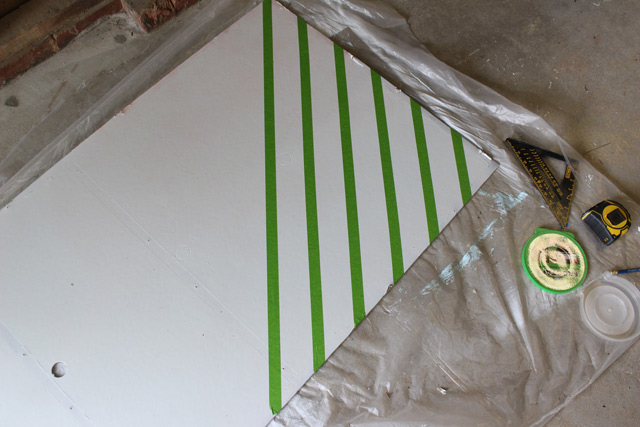 Once I ran out of marks to line up my tape along the top, I measured the distance between the tape lines to make the first mark around the corner. Then I went from there marking every 5 inches again.

When I completed the tape lines in one direction, I used my speed square again to make the first line going in the opposite direction. 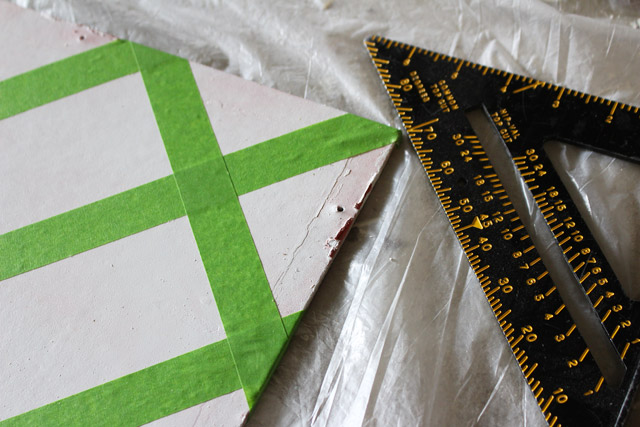 Then I did the same thing marking every 5 inches and laying one tape line at a time until I was done. Not a long process at all. 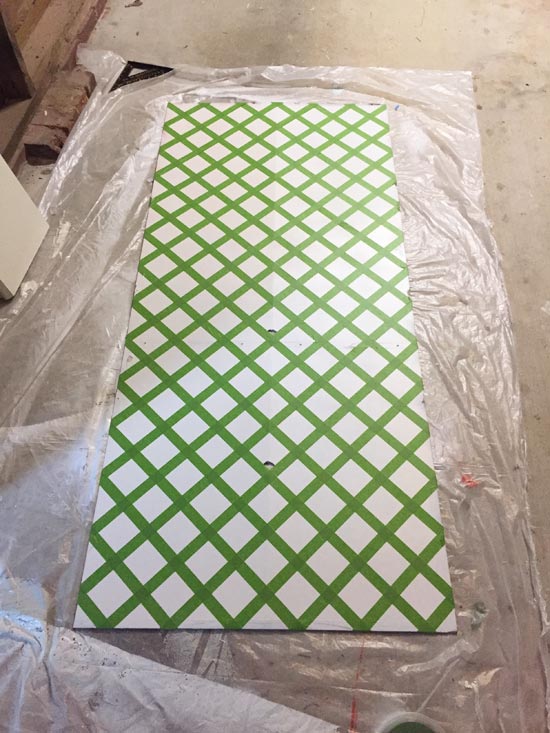 I used my stencil brush to apply my poppy red paint (Chili Pepper by Behr) in a pouncing fashion. 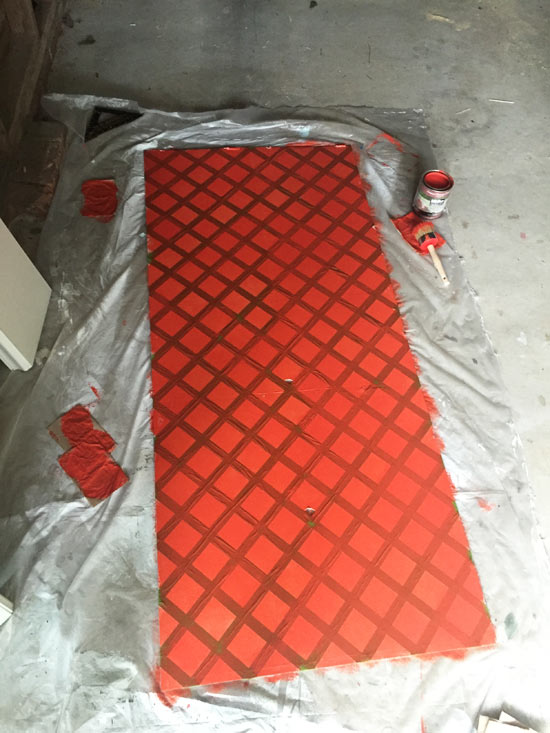 While the paint was still wet, I removed the painter’s tape at a 45 degree angle. I let the bookcase background stay flat on the floor while it dried. 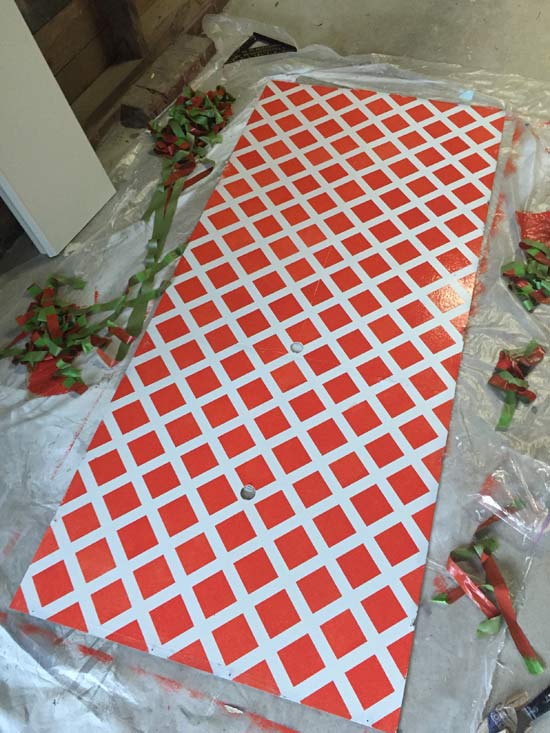 Using the same nails that held it in place before, I reattached the background to the freshly painted bookcase. 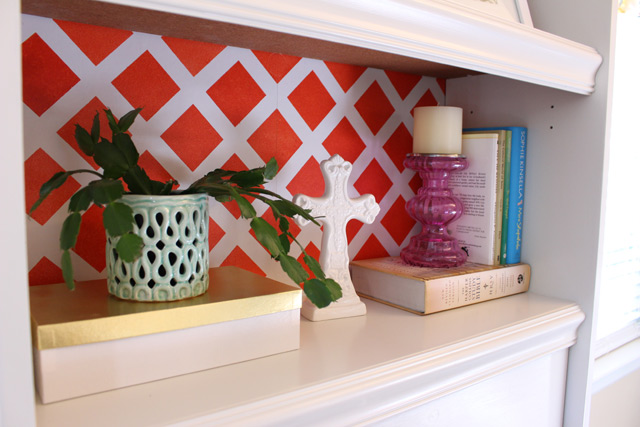 It’s the perfect amount of color pop that this bookcase needed. It reminds me of a picnic blanket, which is perfect for a room made for eating! 🙂 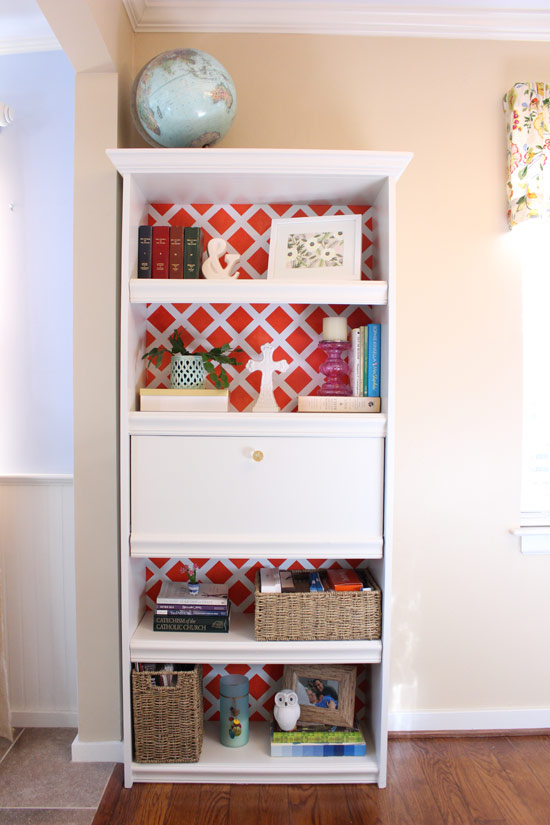 In hindsight, I wonder how laying a piece of actual lattice over it and using spray paint would have worked. If anyone tries it, let me know!