I’ve temporarily put my living room upgrades on hold in order to head outside and soak up some spring! 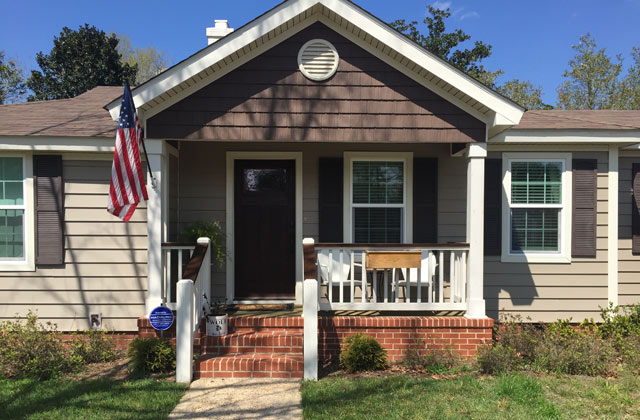 Some people still have snow on the ground because the temps haven’t gotten high enough consistently to melt it. But it’s been getting up to 86 degrees this past week in Mobile and the outside of my house is SCREAMING for attention! Especially the crabgrass that’s taken over in the front and back yards…grrr! But yard issues aside, I turned my attention to an area that hasn’t seen much attention since last fall when I stained and varnished the handrails, the front porch.

Happy to report the handrails still look good, once you dust off the yellow film of pollen that suddenly appeared overnight! But I thought the whole area needed a general cleaning and sprucing up. I decided to take it a step further and “decorate” it by painting a fun design on the concrete slab. 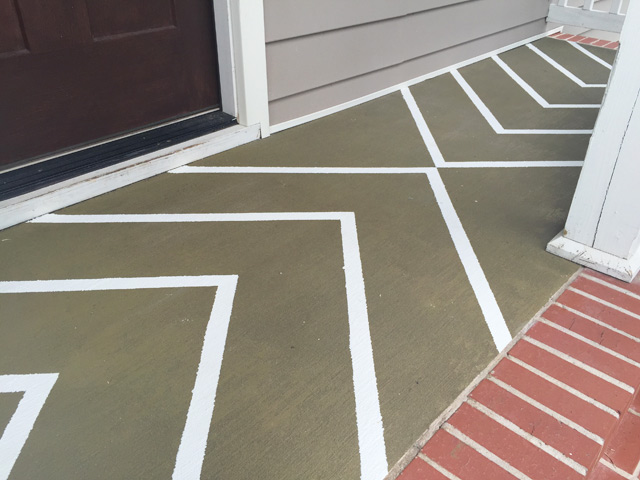 What I really wanted to do was paint a rug. But since my porch is too small to accommodate any size rug that I’d want, I thought why not just paint right on the porch itself? So I started by clearing the furniture and plant stands. You can see the porch already has color on it. That’s something I did about 3 years ago using Deck Restore in Sage. It was a product featured in the Best New Products segment of Today’s Homeowner and I volunteered my porch to get the footage we needed of the product in use. You can watch the :60 video of it here. 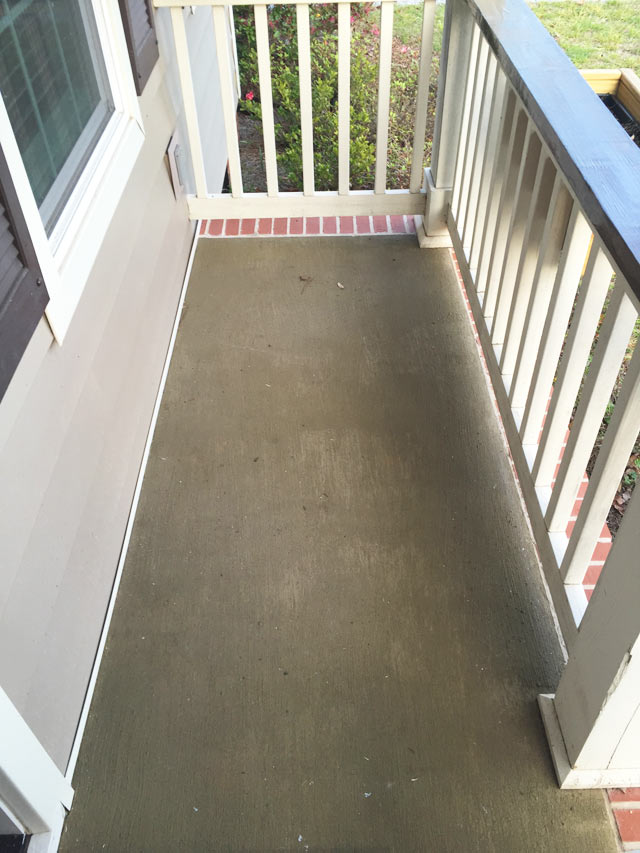 After everything was removed from the porch I realized I’d need to do more than just blow off the debris with a leaf blower. I had some stains from the welcome mat and one of the plant stands. 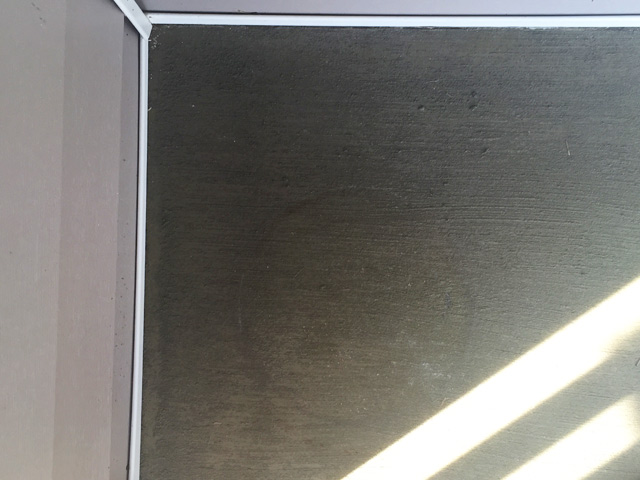 I figured they weren’t going anywhere but were at least worth a little scrubbing. So I went ahead and lightly scrubbed the whole porch since it’s so small and most likely dirty. I used some hot water, dish soap, and a cap full of bleach for extra cleaning power. 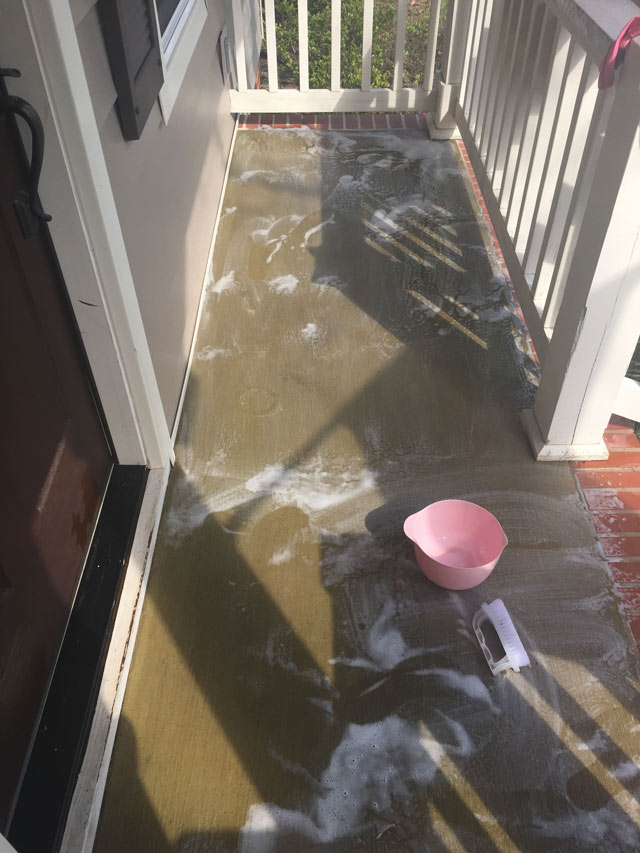 While I was waiting for it to dry, I measured and marked the center of the porch. 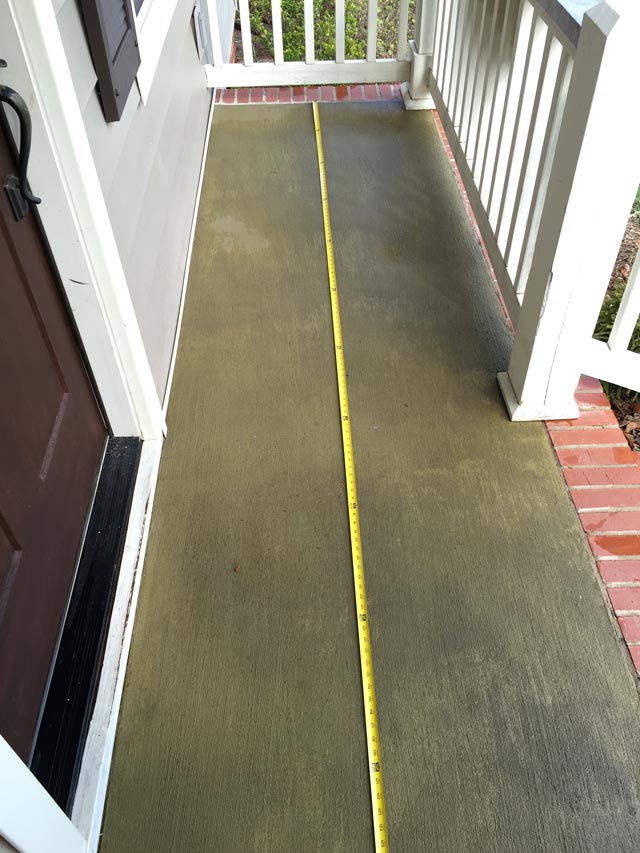 I already had a design I was planning that had randomly come to mind. But I needed to decide the width of my stripes. So after the porch had dried enough, I put a piece of painter’s tape on the left side of the center mark, all the way down. 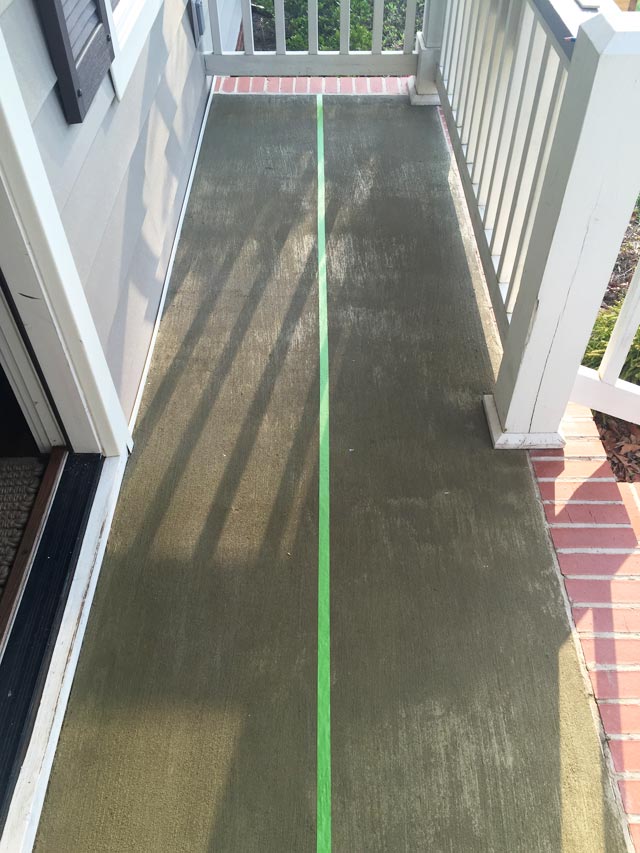 Then I played around using a yard stick and tape measure to eyeball the approximate distance I wanted between the stripes. 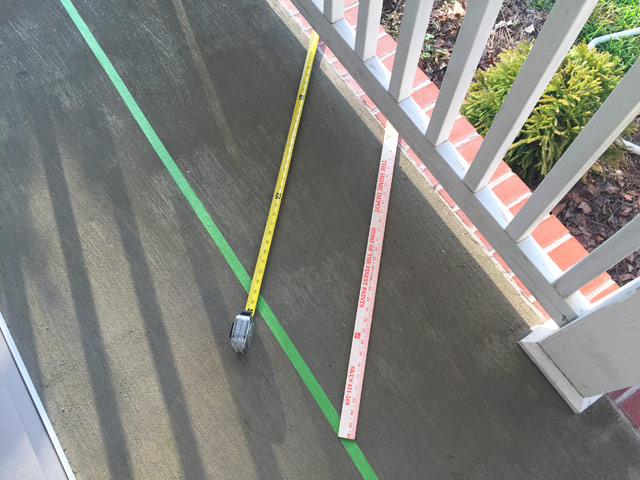 I had to employ a third measuring device to measure the distance once I had them where I wanted. It ended up being 13 inches from the edge of one stripe to the edge of the next one. 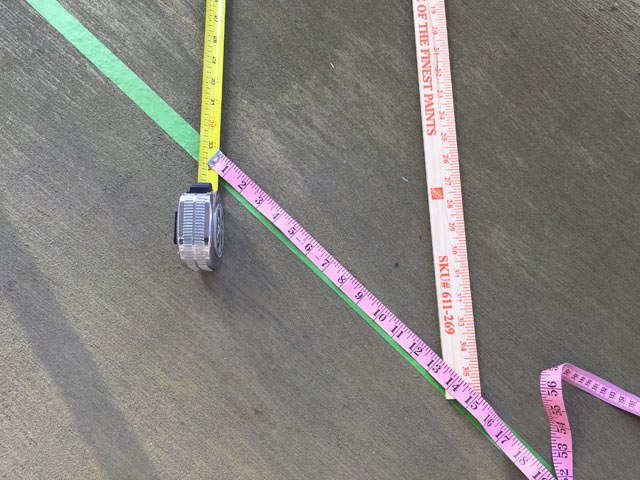 Now I was finally ready to layout the design, slowly, with painter’s tape. The yardstick was the perfect width for each individual stripe. So I laid it down and taped on either side of it. I decided to tape and paint the porch in 4 quadrants to reduce stress and mistakes. 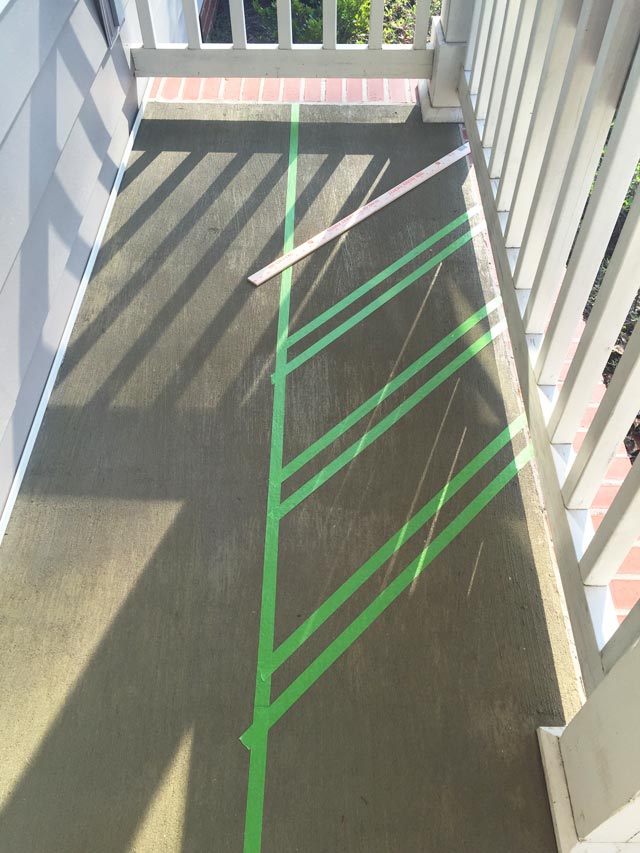 To make sure each stripe was at the same angle as the previous one, I measured from the inside of the tape out 13 inches. And that’s where the outside of the next stripe would start. I checked the distance on each end so it was evenly spaced the entire length of the stripe, too. 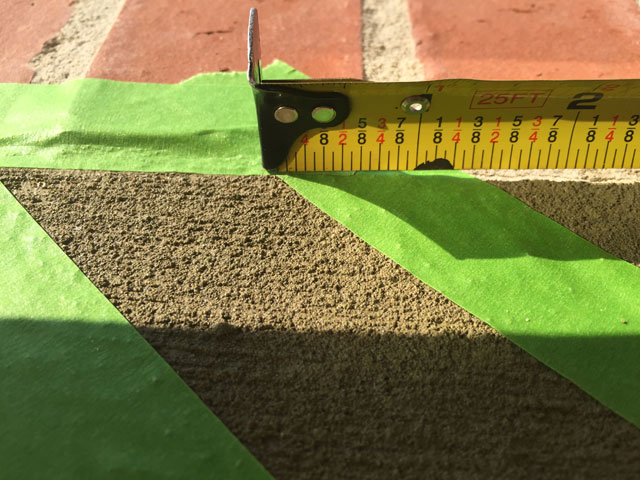 I also wanted to make sure when I reversed the stripes on the other half of the porch that they would be at the same angle. So I used the yardstick to extend my center line to the edge. Then measured from the first stripe to the center line. That gave me 21 inches which I then measured and marked in the other direction (on the other side of the column). 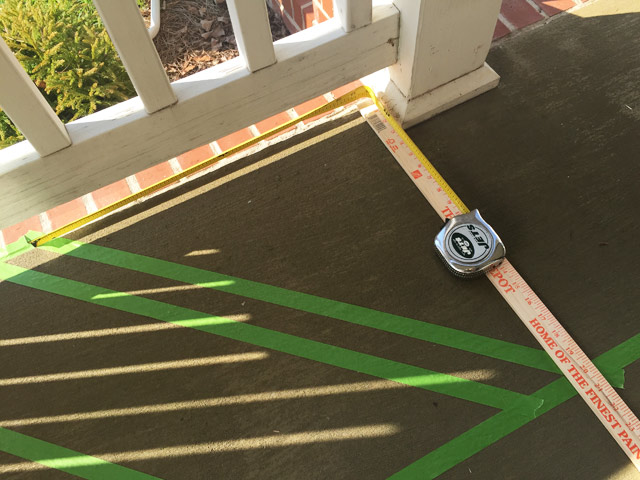 It was a slow, tedious process to get the stripes taped. So once I had the first section of the porch taped, I couldn’t help but get to painting! But before I slapped the paint on, I “burnished” the tape using a putty knife. That just means running the knife down to smooth the tape and make sure it has good contact to prevent bleeding. Fun fact: anytime I think of burnishing, I always sing “Burnish down the tape” in my head (OK, sometimes out loud) to the tune of “Burning Down the House”. It makes it way more fun! 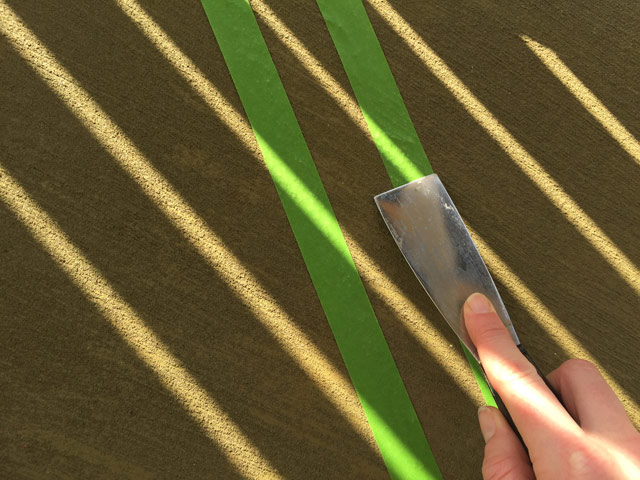 Burnishing was probably an unnecessary step since I was expecting some bleed-through anyway considering it is a textured concrete surface. There is no “smooth” to it for the tape to seal.

Regardless I did and then I was ready for the first coat of paint. I used some I had laying around the house, it’s Behr exterior latex that was color-matched to the pearl vinyl trim on the exterior of my house. I was surprised at how well 1 coat covered the green. 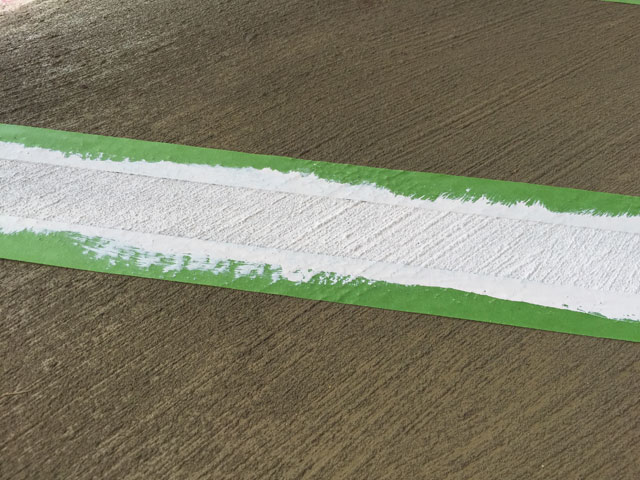 But since 2 coats are always better than one, I waited on removing the painter’s tape until I painted a second coat. Then I moved on to the other half of the porch that’s on the same side of the big, green center line. Measuring and taping the 5 stripes there before painting some more. 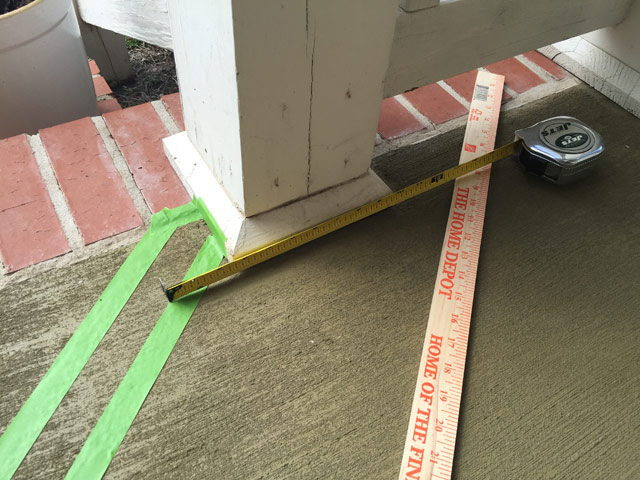 This time while the 1st coat was drying, I worked on taping the coordinating stripes from the other side. I removed the center tape line from the half that was dry so that the stripes would meet in the middle. 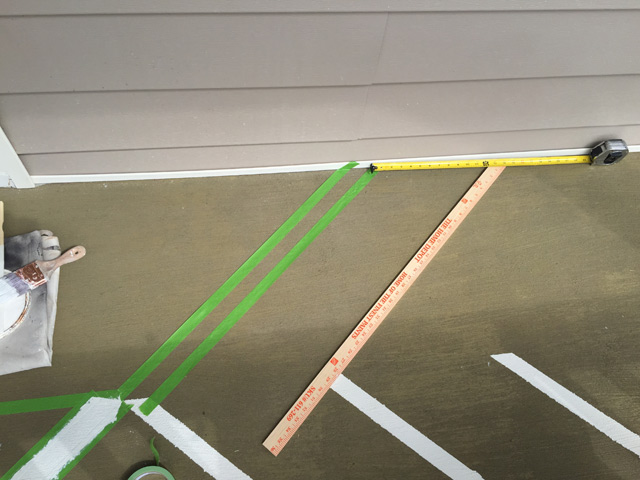 I used the same 21 inches to find the start of the first stripe, making sure the other end of the yardstick met up with the existing stripe correctly. Then I used my 13 inch measurement again as I went down the porch taping those 5 stripes. (Each quadrant has 5 stripes.) 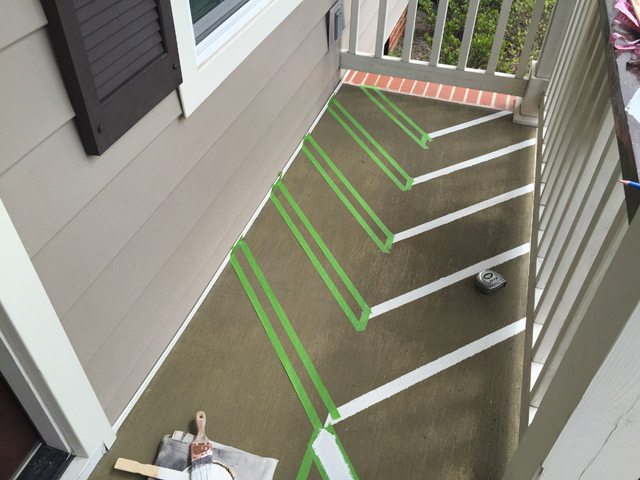 By that time, the stripes caddy-corner were dry enough for their 2nd coat. Then I was able to move right on to painting the 1st coat on the 3rd quadrant.

I repeated the whole process one last time to tape off the 4th section. Once it had been painted twice, I removed the painter’s tape and called it a day!

The bleed-through is a little worse in some spots, but over all I’m pleased with how it looks. It’s not so obvious that house guests will be offended. And since it looks the same on each stripe, it has an intentionality to it that works. 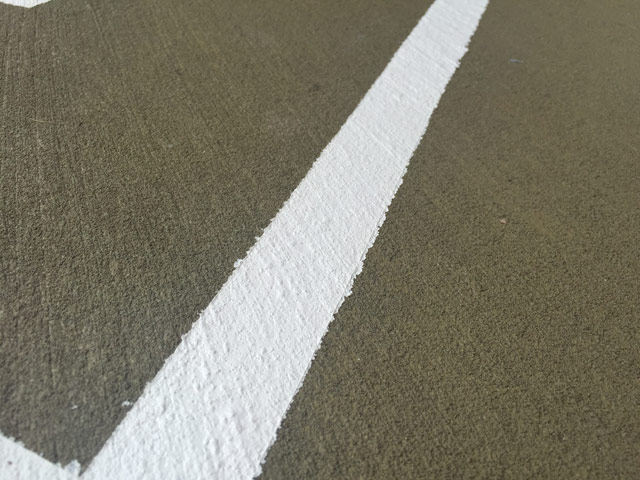 Sometimes you have to step back and see the big picture to not worry about a little bleed-through. 🙂 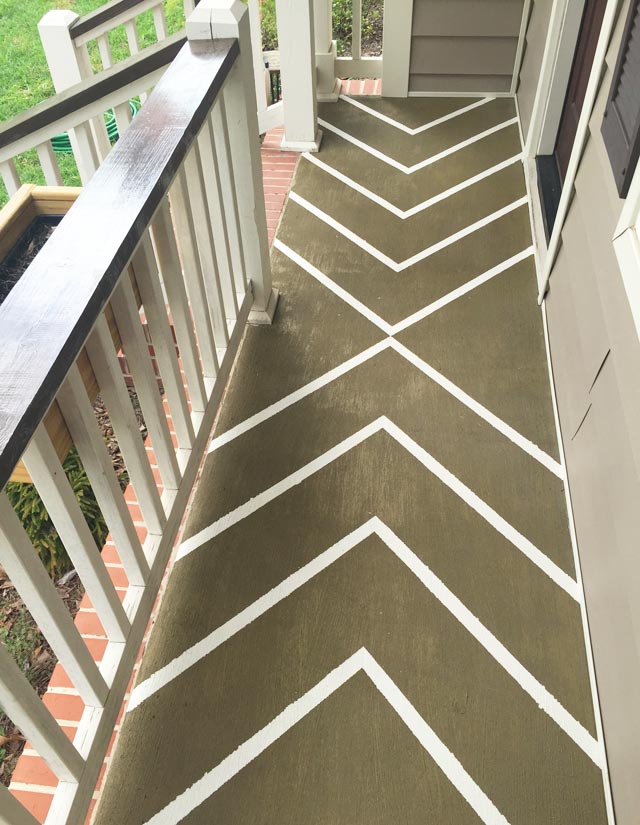 Now the approach to the front door looks a little more futuristic. 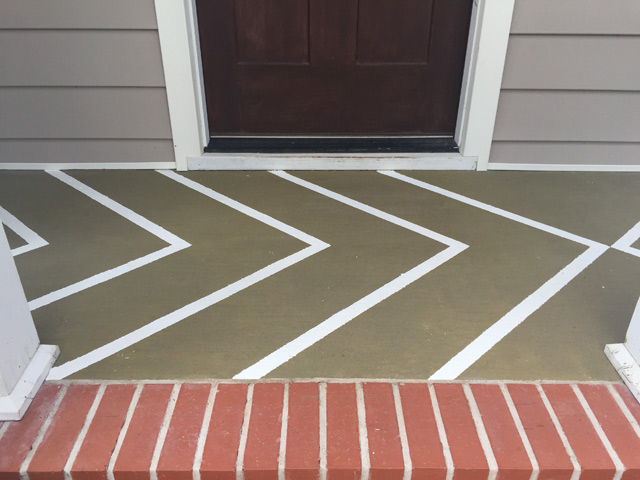 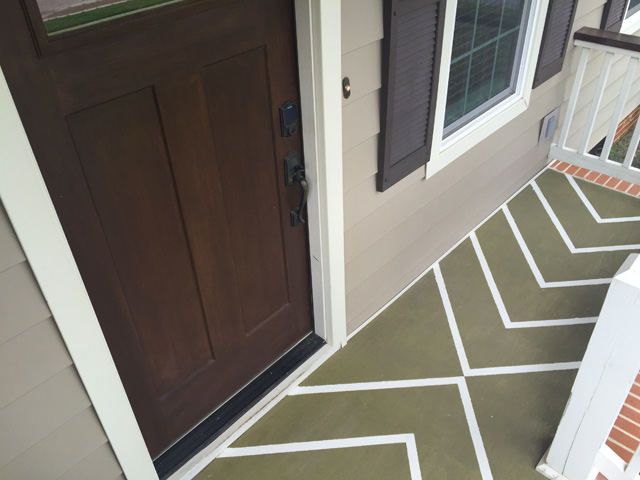 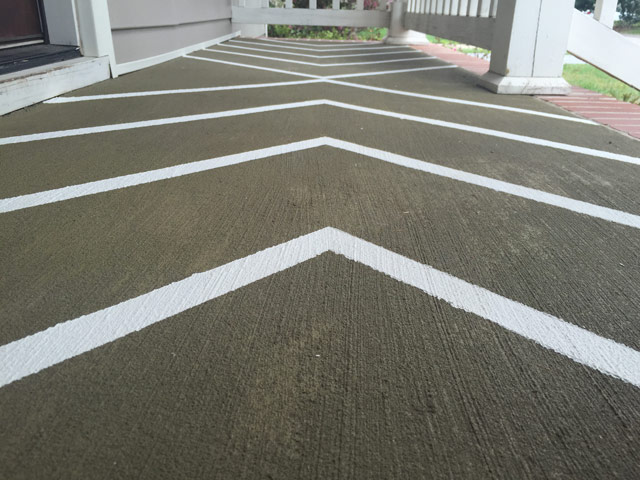 Well, that’s what I did this week. How about you? What projects are on your list for this weekend? I’m planning to tackle a lot of cleaning inside and tweaking things that have been bothering me lately, like a squeaky bathroom door. Comment below!