You are here: Home / Videos / Styling a Gallery Wall Around a Thermostat

Happy Fall Y’all! The change in seasons is always an exciting time. Especially when you have fun projects to do! And getting a new thermostat and creating a gallery of family photos to go around it are what I call a good time!

I’ll admit I was a little appalled my friend Kimberly did not already have a programmable thermostat installed in her house. (Sorry Kimberly!) Setting a schedule for the temperature to raise and lower in your house whether you’re home or not is one of the greatest home improvement tricks I can think of. Besides blow drying plastic film on your windows.

So we started our project by upgrading her thermostat to a cool, savvy, “smart” thermostat from Carrier* called the Cor. Since Kimberly has a complex, duel-fuel HVAC system, she called a licensed dealer to install her thermostat. But if you’ve got a simpler system, you can pick up this same thermostat at The Home Depot or through my Amazon affiliate link above and install it yourself! (UPDATE: The Car thermostat is now compatible with Amazon’s Alexa!)

Once Chris the installer had it on the wall, Kimberly and I set a quick program based on her family’s current schedule. Since this thermostat is WiFi-capable, we downloaded the app that allows her to control her t-stat from anywhere! And since this unit is “smart” it will learn her family’s habits and re-program itself based on the temperatures they adjust it to when they’re home and turn the temp up or down when they’re not home.

A little freaky, a little awesome!

With the new, square hardware on the wall, I had one small trick to show Kimberly. We replaced the air filter just below the thermostat and added a few drops of her favorite grapefruit essential oil. So when her HVAC system is pulling air through the filter, it’ll also add a delicious scent to the air in her home! You can also use vanilla, almond, or orange extract if you don’t have essential oils!

Now Kimberly was ready to update the look of her family’s main “entry wall”. With 2 young kids, she has a ton of digital photos but none of them have made it on the walls around the house. So we gathered a bunch of frames of various sizes but with a matching finish to create a gallery wall.

There are so many different ways to put a gallery wall together! And they all depend on you and your home’s style. You could have frames all the same size, but different colors. Or different types and size of frames with the same color. Or what I did for my daughter’s nursery was create a wall of mixed frames and other items that were all gold, pink or white.

To start, we worked and reworked our frame configuration on Kimberly’s dining table. We used a 4″x4″ piece of newspaper to be the thermostat in our layout. 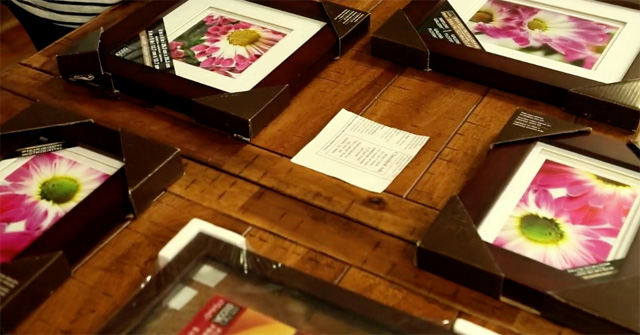 Once we were satisfied with how our frames were shaping up (based solely on personal preference), we began tracing our frames onto newspaper. 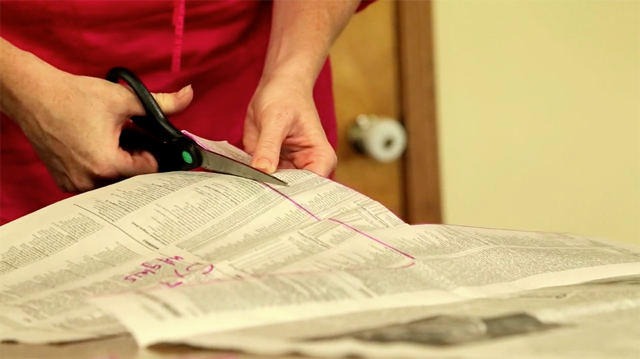 After we cut out and labeled all of the templates, we used painter’s tape to put them in place on the wall. This is great if you’re a visual person. It allows you to see the layout in the actual space without hammering a bunch of nails before you’re ready! And it helps eliminate having to measure between frames to hang them just right since your templates are already adjusted to look great! 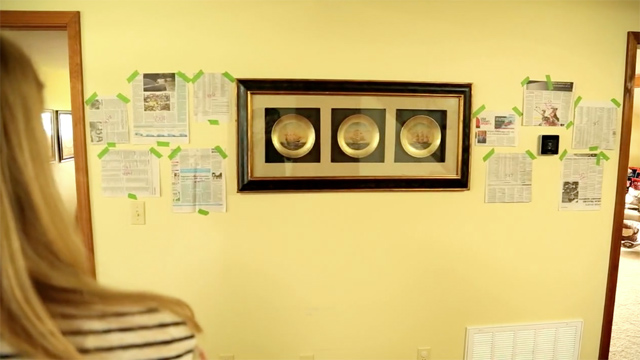 We moved a few templates around before we had it just the way we wanted. The templates also come in handy for the next step-nails! Simply measure from the top of the frame to the hanging point on the back. Then use that measurement to mark on the newspaper templates. Instead of one nail in the middle per frame, we used two nails on either side of center to keep the frames from shifting and becoming unlevel.

Using small wire nails, we put a nail in every mark on the templates before tearing the newspaper off. It also helps to use a level if you’re using 2 nails per frame to make sure they’re level with each other. 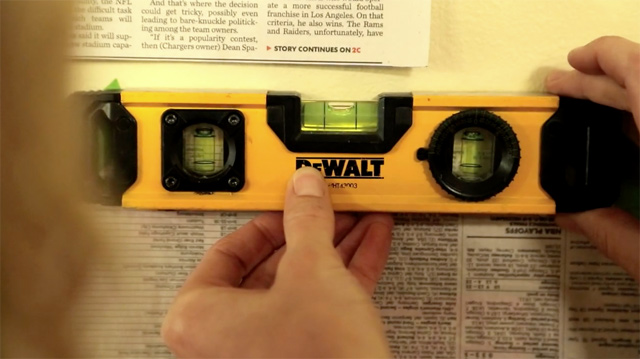 Next it was time to hang the frames! Easy, peasy and the results look great! Even though Kimberly has a large dining table (for her large extended family) that’s normally in front of this wall, I think the family photos will outshine it and be the focal point in this room! 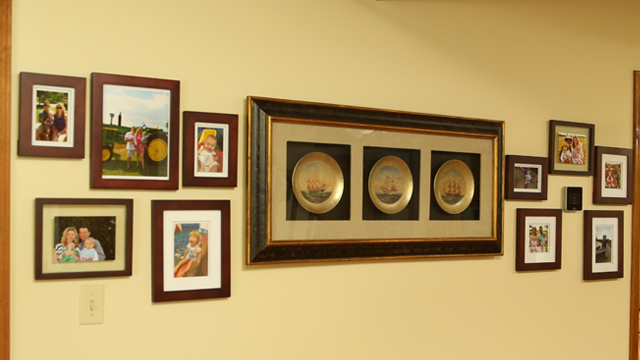