This month I help my friend Marie get her new room ready to be occupied. The house she’s moving in to is a lot like mine before we remodeled it 3 years ago. Lots of character, but old with drafty single-pane windows.

And even worse, the exterior walls of her bedroom are practically just those windows. 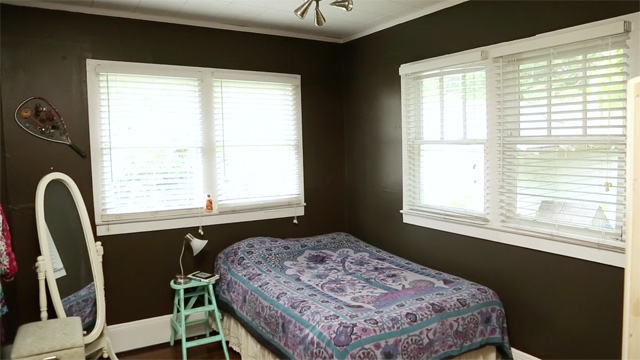 So we start by updating them without replacing them by applying a window insulation film. This basically creates an extra pane essentially making the windows double-pane while still being able to see out of them.

The kit we used from Duck Brand* comes with everything you need except scissors (or razor blade) and a hair dryer, which I’d imagine most people already have on hand!

Once we had our supplies ready, we removed the faux wood blinds to access the window trim. Then we wiped the edges around the window with the included alcohol wipes. Got to make sure there’s no residue to inhibit the tape from sticking! 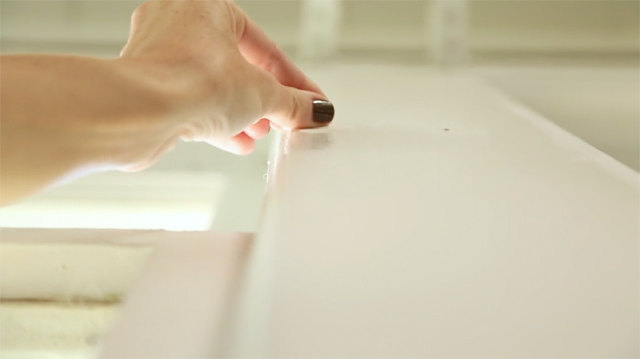 We decided to insulate each window separately. Although the way Marie’s windows were structured, we could have easily done the 2 windows near each other as one.

Next we applied the double-sided tape that came with the kit along the 2 sides and the window sill of each window. Our window film comes with one pre-taped side, so that goes along the top. Leave the liner on the tape until the plastic is in place.

Roll out the pre-taped plastic film along the top of your window, leaving a few inches on either side. Unfold the plastic and cut it to length, also leaving about 2 inches. Now you can remove the liner from the tape. Touch the plastic to the double-sided tape in a few places to make sure the plastic is lined up correctly without major wrinkles. Readjust the plastic on the tape as necessary. But don’t pull the plastic super tight right now. That will come later. Seriously, leave a lot of slack in the middle.

It’s not going to be 100% wrinkle-free, but once you’re satisfied that the big wrinkles are gone, firmly press the plastic to the tape around the window.

Run the hairdryer over the film slowly on high heat to watch the wrinkles dissipate! Start several inches away from the film because you DO NOT want to get too close. It can burn a hole in the plastic without even touching it.

And I only know this from personal experience. I used this same kit on the old, aluminum windows at my house over 4 years ago before they were replaced with new ones. Fortunately I wasn’t blogging at the time, so there’s no evidence to prove I was too aggressive with the hairdryer!

Seriously, it is so satisfying to watch the wrinkles disappear before your eyes. But the real magic is that this thin piece of plastic can save you big monies on your energy bill this winter. AND improve the comfort of the room. (I also know this from experience.)

OK, once all 4 windows had been properly insulated, we trimmed the excess on the outside of the tape and replaced the faux wood blinds.

Then it was time to upgrade the look of the windows with curtains. We kept it simple by creating no-sew curtains which I’ve made before on an episode of Today’s Homeowner.

You take a fitted bed sheet (we used a queen-size since the windows are rather wide), fold it in half, and slip a curtain rod through the middle. Then tie a coordinating ribbon along the curtain and over the rod to cinch it in several spots. We did this 3 times for each curtain we made.

Instead of using traditional hardware to hang the curtain rods, we opted for adhesive hooks so Marie won’t have any holes to patch when she decides to move out. They’ll come clean from the wall without causing damage.

We hung the curtains on our hooks and then fluffed the sheet draped between the ribbons to even it out and make it look great! 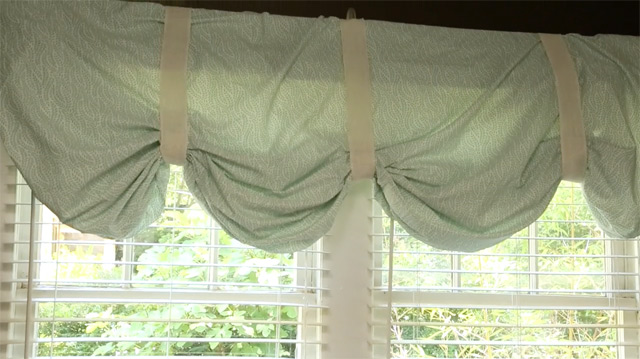 Now with the windows looking sharp and operating way more efficiently, I had one last thing before I left Marie to finish her moving. We installed gaskets (Socket Sealers also from Duck Brand) around the outlets on the inside of her exterior walls. Just one won’t make a difference in Marie’s heating and cooling costs. But adding them to every outlet and light switch on those exterior walls throughout the house, in addition to the window film we installed, she should be nice and cozy and stress-free when she receives her first utility bill this winter!

Once winter is passed, she can easily remove the film. And if she decides to move, she can be stingy (like I would be!) and take her gaskets with her!