How to Change a Light into a Ceiling Fan 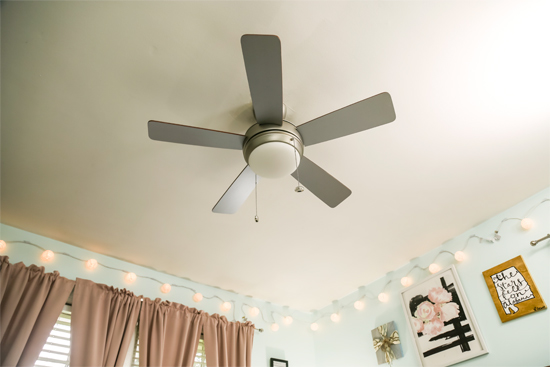 You don’t need to hire an electrician to change out your old bedroom light fixture for a stylish ceiling fan! I’ll show you how to do it yourself!

For some situations, just turning off the light switch will kill the power to your light fixture. But there are some wiring situations where this is not the case. So the best bet is to turn off the power at the source – the circuit breaker!

After unscrewing whatever is holding your old fixture in place and lowering it from the ceiling, you’ll see all of the wire connections. For this particular scenario in the video above, power was running through this room into other parts of the house so there were A LOT of wires. I took a picture so I could make the same connections when I installed the fan. And I totally recommend you do the same if you have the same situation!

Carefully remove the wire nut connecting the black wire from the light fixture and use an inexpensive voltage detector to triple check there is no power coming to it. You can find them for less than $20 and the peace of mind is worth that and more!

Once that’s behind you, unscrew any remaining wire nuts and the old fixture should be free!

The most important part of updating a light for a ceiling fan is having the proper box in your ceiling. You don’t want a heavy fan attached to just anything in the ceiling!

First, you’ll want to make sure you have a box that specifies it’s approved to support the weight of a fan. It’ll say something like ‘Approved for Fan Support’. If you already have one in your ceiling, great!

If not, you’ll want to remove the existing box and see what’s behind it. If it’s attached to a 2×4 or ceiling joist, you’ll just need to get a new box and attach it in the same way. In the case of this video, there was a metal bar suspended between and attached to 2 ceiling joists. So I was able to simply replace the metal box itself.

If you just have a box stuck in the ceiling, you’ll want to get a ceiling fan support box with brace kit* (under $20). It slides into the hole in your ceiling and you tighten it down so the teeth go into the ceiling joists, securing it without going into the attic!

Once you have the proper support in place, you’re ready to assemble and install your fan!

There are so many fan options to choose from that it can became overwhelming! What I like to do in many different aspects of life to make it simpler is to find a brand I love and can trust the quality of and stick with it. It eliminates a lot of the overwhelm and decision fatigue! For example, if I know a certain clothing company always has clothes that fit me well, I’m going to buy from them when I need new clothes. The same is true of home improvement products like lighting! (I’m sure you saw where that analogy was going!)

That’s why I partnered with Kichler Lighting for this ceiling fan installation! They’ve got pretty, stylish and high-quality fans, so choosing a fan from them is a breeze! (Love me some puns!😃) And if there’s anything in your life you want to be high-quality, it’s a spinning fan above your sleeping head!

**This episode is sponsored by Kichler Lighting. However, the opinions expressed are honest and 100% my own!**

Besides the look and style of a fan, there is also size to consider. A basic rule of thumb is based on the square footage of your room:

And just for reference, the one installed in this video is 42″!

Besides the added steps of the fixture assembly and fan blade installation, installing a ceiling fan is just like a light fixture. All you do is put the wires together and screw on a wire nut! If you’re replacing a light fixture with a fan, you probably only have one light switch in your room. So just like I did in the video above, you’ll take the black AND blue wire from the fan and connect it to the black wire coming from your house.

To do that, you twist the ends of the wires together, then screw a wire nut included with your fan onto the ends of the wires. Then connect the white wires in the same way. Lastly, take the third wire (usually green or copper) from your ceiling fan, twist it around the green screw on the mounting bracket and tighten with a screwdriver.

I won’t go into all the details on installing the fan because each fan is different and the directions were really easy to follow with nice diagrams! But I will say the mounting bracket that came with this fan is life-changing. The last time I installed a fan, it was a 2-person job. One person was needed just to hold the fan while the other person did the wiring. So I was relieved to see that once this bracket was attached to the outlet box in the ceiling, you slid the fan rod into place and twisted to securely hold it in position without sweating!

So this truly is a project anyone can take on! Let me know in the comments if you HAVE to have a ceiling fan like me!