A Few Changes in Our Kids’ Shared Room 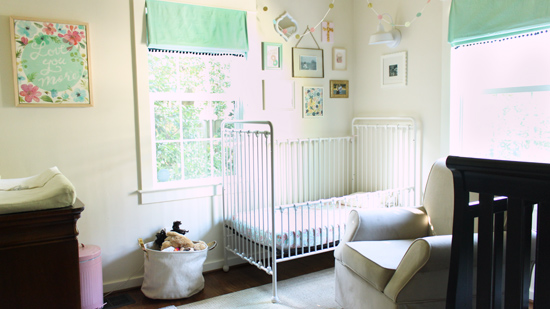 I shared several months ago that we were going to make a few changes to Mary Helen’s nursery to make it more dude-friendly for Gus since he now resides in there as well. Between updating our bathroom and dining room at the same time, I just now got around to completing those changes. 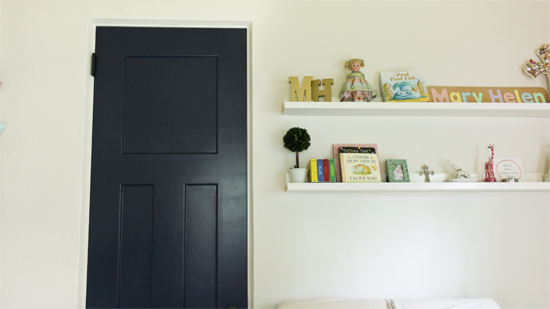 I already shared how I painted their closet door a rich navy blue in my latest episode, but here’s what else is up in there!

The first thing I completed in here was new Roman shades. I dyed some white curtains we already had to get them just the right shade I was looking for. (I followed Rit’s formula for the color “Beach Glass”.) Then I followed my previous Roman shade tutorial to make them functional. After searching and searching and searching, I ordered some navy blue pom pom fringe from an Etsy shop in the UK because apparently no one in the United States sells navy blue pom poms that are 1 inch wide.?

I think that small detail on the bottom gives them the perfect amount of flair.

After getting the shades in place and giving us a few more minutes of sleep in the morning thanks to their blackout lining, I worked on updating the lamp situation. We had a hand-me-down lamp on an end table, but Gus always played with the cord, plugging it in and unplugging it. So obviously we needed to put that to rest. I mentioned in the mood board post that we were going to order some wall sconces and use battery-operated lights inside them to avoid running new wiring. I’ll be sharing a post soon on how I attached them to the walls without an electrical box behind them, but in the mean time, here are the sweet sconces: 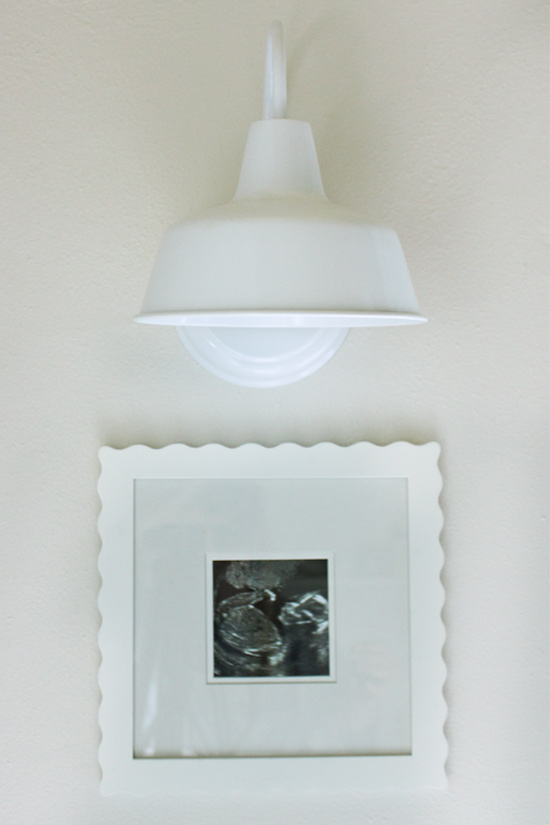 I added a small picture of each kid in utero beneath the lights and above their respective beds.? 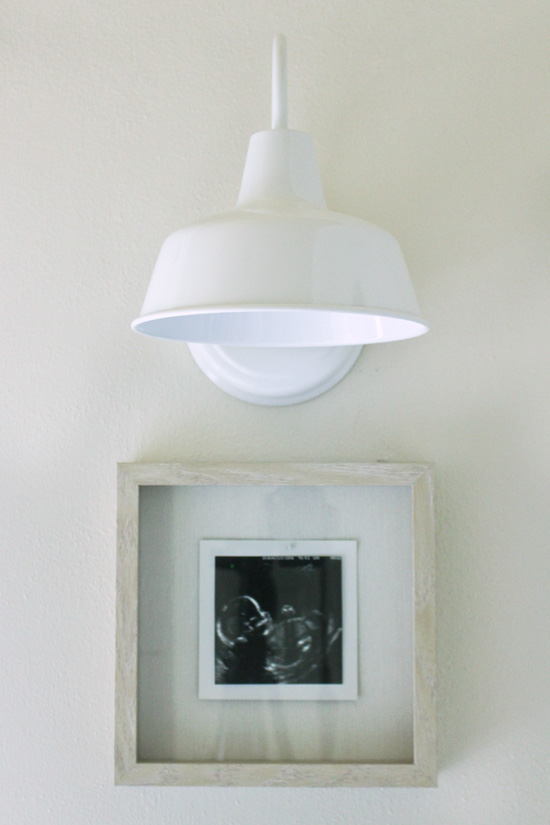 Another small change I made was adding a simple wood frame around the canvas hanging near the changing table. It cost about $8 for an 8-foot piece of pine, but it adds more than that in terms of warmth and cute! Plus it helps break up the white canvas background and white walls. 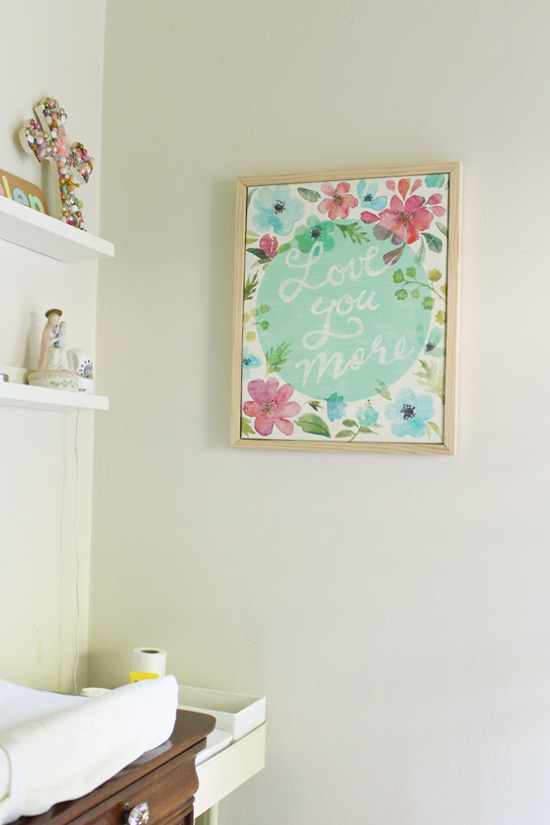 I bought a few new frames, used a few from his old room, and found some in my stash to update the gallery wall on Gus’s side of the room. Nothing crazy, but definitely more masculine for my little man. 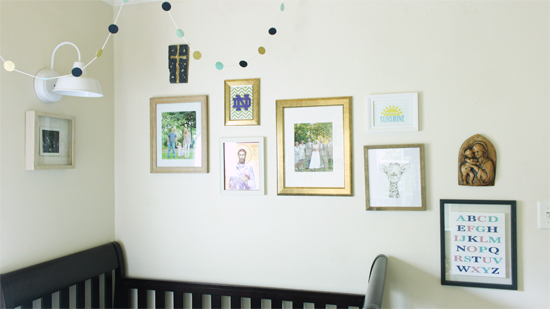 I did the same thing for Mary Helen’s side by using things from her old gallery wall and buying a few new frames. 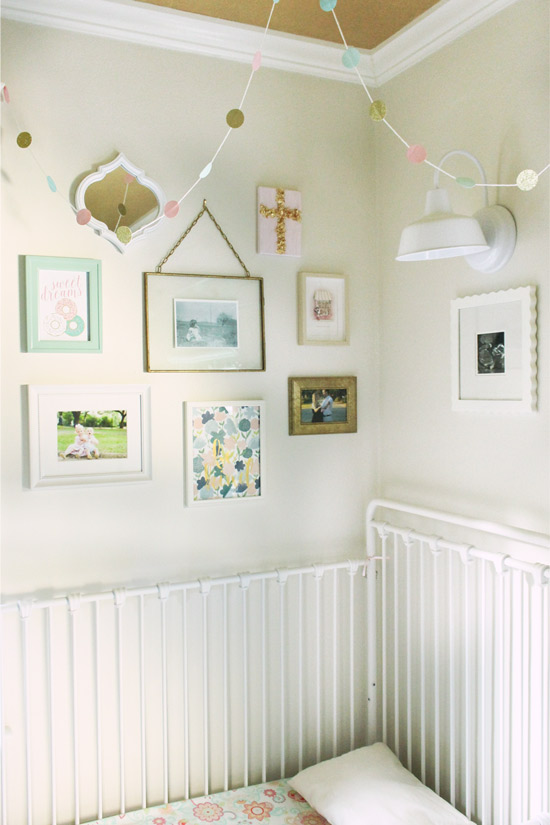 I usually have to hold myself back from buying art with phrases and quotes because otherwise I would buy every single one. But this time I gave way when Stencil Revolution reached out asking if I would like to give their stencils a try. I knew I would be working on updating the gallery wall and could use something cute in it. And when I saw this ‘Be Kind’ stencil*, I knew I wanted it for the wall and as a reminder of how I want to raise my children. 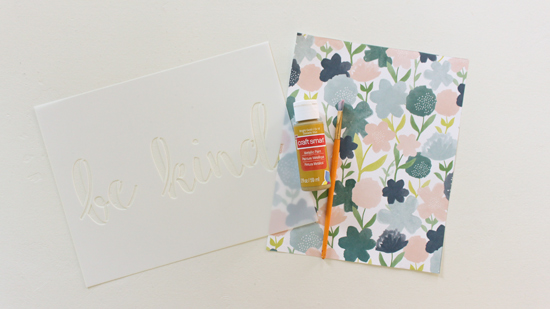 I picked up a cute piece of scrapbook paper from Michael’s for less than $1, cut it to fit my frame, and then traced the stencil onto it. 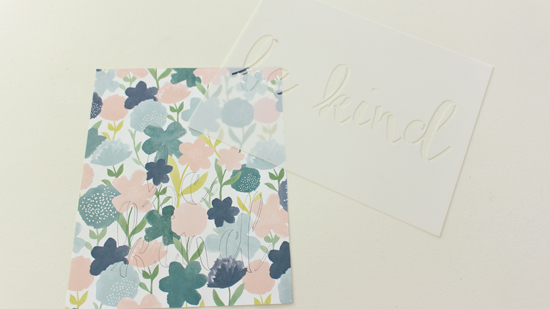 And after a couple layers of acrylic craft paint, it was ready to frame! 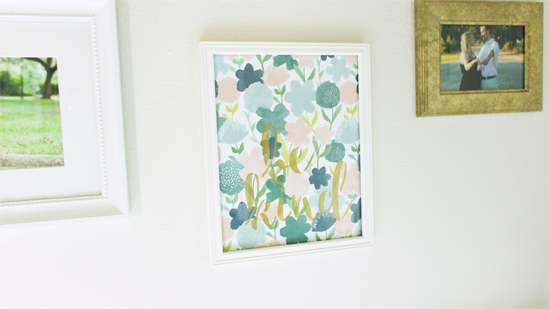 *Stencil Revolution sent me this stencil free of charge, however I would have used it regardless!

I think that gets you up to speed on the current state of the kiddos’ room! Check back soon for the how-to on hanging wall sconces without running wires. It’s a great alternative to traditional wall sconces and perfect for adding some accent lighting. 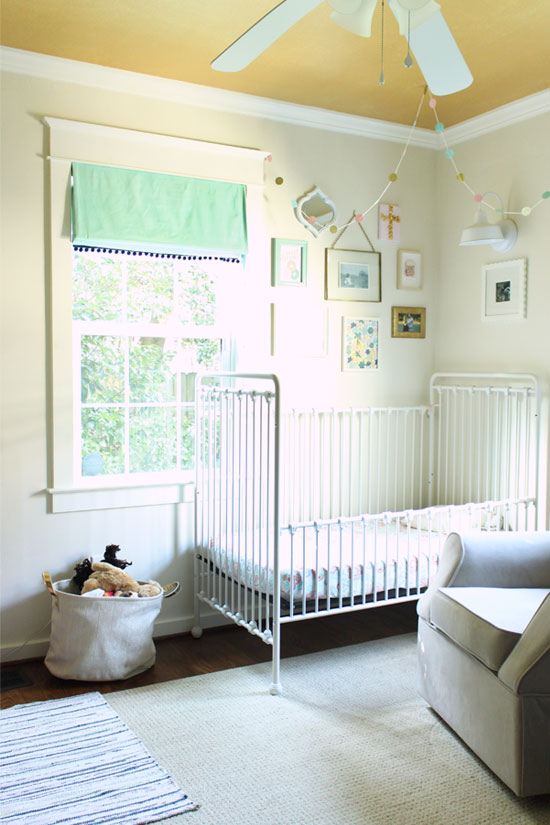