Just popping in to share the gallery wall I put together for baby Gus’s room! 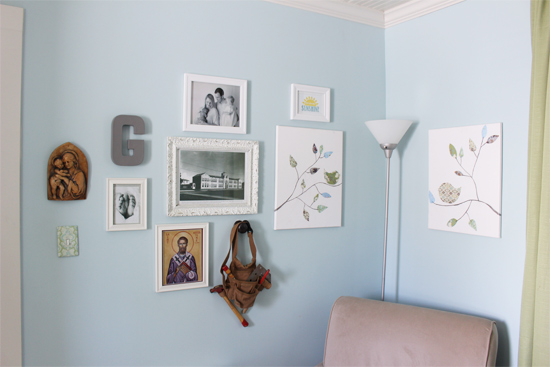 I’ve been collecting white frames for a while now with the idea of doing a larger gallery wall somewhere in one of our living areas. But it doesn’t look like that’s ever going to transpire, so I decided to use some of them for baby boy’s nursery.

I did a similar gallery wall for Mary Helen’s room before she was born with sentimental mementos. And this one is no different. 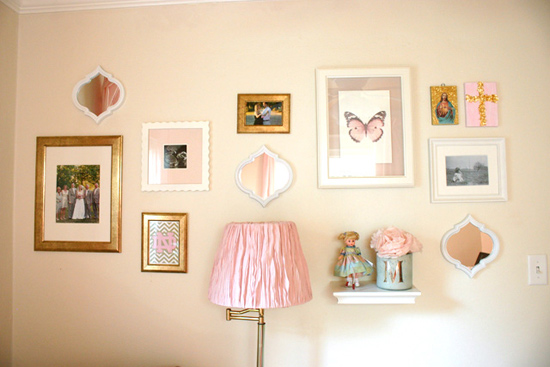 The best way I know how to find the right configuration of frames and other objects is to lay them out on the floor and play around with the arrangement until you like what you see. So I did just that here.

Right after Gus was born, Dad gave him a tool belt with tools from one of his Handy Andy tool kits. (You can see it at the end of my webisode where we built the window seat in Gus’s room.) If you don’t know what Handy Andys are, Dad explains them in this video.

So instead of the tools hiding in his closet for a few years, I put them to work as decoration on the wall! 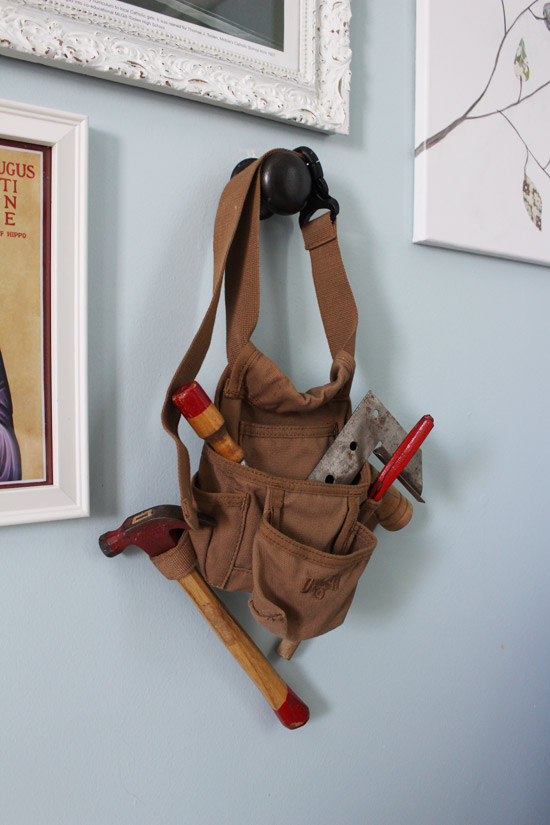 I screwed an old door knob to the wall for it to hang from. I’m sure I’ll live to regret hanging the tools when he’s mobile and climbing everything! But until then it’s pretty cute.

The plaque above the light switch was a wedding gift, the ‘G’ is cardboard from Hobby Lobby that I painted using the same gray as the footstool legs and the shelves, and the green-tinted black and white photo in the middle is an old photo of the high school my mom and I attended and where Gus and Mary Helen will also go…eventually.

The other black and white photos are from his newborn photo session. I mean, look at those baby toes!? 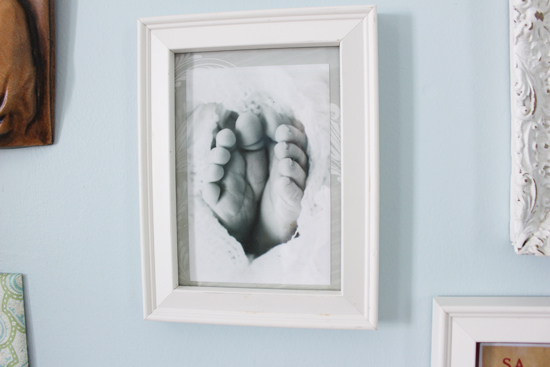 And lastly the gold picture is what’s called an icon of Saint Augustine, Gus’s namesake. He was a great saint from the 4th century. He was an intelligent man but lived a ‘wicked’ life until his conversion. You can read more about his story here. I like that the icon, and Gus’s middle name, will always serve as a reminder to Gus, and to us, that no matter how far we stray from God, God’s mercy is more and we can always turn back to Him.

I think that brings you up to speed on the happenings in Gus’s room. Obviously I’m spending a great deal of time in there these days, so I may get an itch to mix things up before too long…like when he’s ready to move to a crib…which we don’t quite have figured out yet.

I’ll keep you posted.? Thanks for Checking In! ~Chelsea