CANNOT believe it has been 4 weeks since we welcomed our sweet boy into the world! Fortunately for me, he eats and then falls right back to sleep. So I was able to knock out these shelves for his room that I didn’t quite get around to completing before he made his grand entrance. 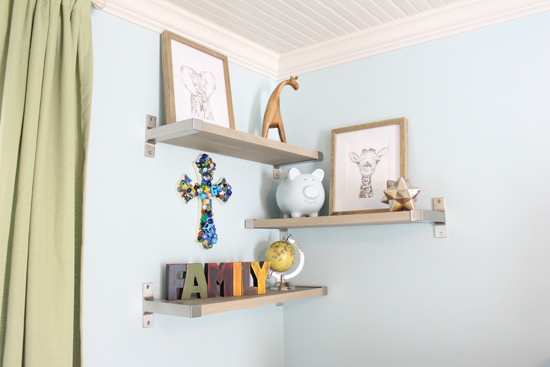 I wanted something a little more manly than the crisp white ledges I made for Mary Helen’s room. And in my mind, gray wood tones=manly.

Before I cut and made the shelves, I ordered IKEA’s EKBY BJARNUM shelf brackets to hold them up. (Since the closest IKEA is 5 hours away, I ordered mine from Amazon.) They’re designed specifically for shelves sold at IKEA, so I had to hunt to find some wood that would slip into them.

The opening of the bracket is 1 inch thick and 7 and a half inches deep. Well, it’s hard to find lumber that’s actually 1 inch thick. So I searched and searched for an easy and inexpensive way to get a shelf thick enough. Then I stumbled upon stair treads. 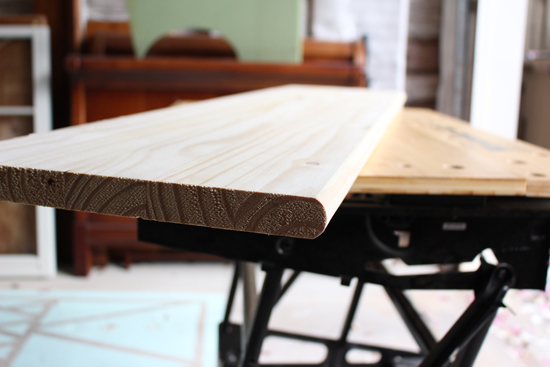 They are 1 inch thick through and through. And these particular ones were 4 feet wide. Plenty long enough to get 2 shelves out of one board. And they only cost $13 each!

Since I needed it to be 7-1/2″ deep, I had it ripped on a table saw. I made sure the rounded edge was cut off since it wouldn’t look right in my square-edged brackets.

Then I stacked them on my miter saw to be cut to length. I marked the center of the boards and lined my saw blade right on top. That way each board would be exactly the same, slightly less than 24 inches. You have to take into account the width of the saw blade! Something I don’t always remember! 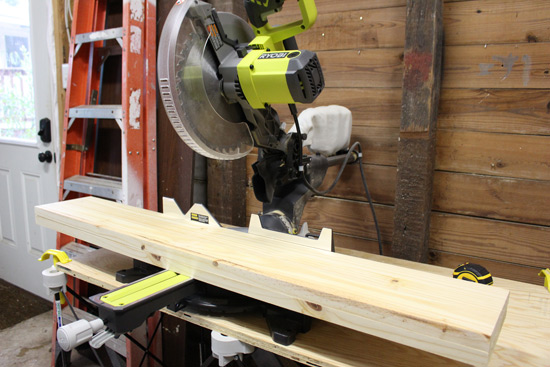 After lightly sanding my shelf boards, it was time to stain them. I used the same ‘gray-washing’ technique I used on the footstool in his room. But this time I diluted the gray latex paint even more. I mixed 1 part gray paint to 2 parts water to allow more of the wood to show through. Then I rubbed it on the shelves with a rag, just like you would with regular wood stain.

And I love the way it turned out! It was exactly the color I was picturing when I dreamed up these little shelves. After all 4 sides had been stained and dried (you don’t have to stain the 2 ends since they’ll be covered by the brackets), I applied my trusty topcoat and let that dry too. 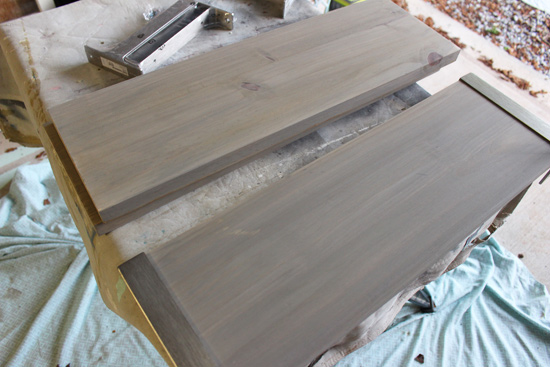 Before I slipped the brackets on each end, I selected which side of the board was the prettiest and made sure it was facing down. On one side of the bracket, there were holes to screw the bracket to the face of shelf board. So I had those holes on the top of shelves. I was planning to hang these shelves fairly high, so the bottom of the shelf would be what’d be seen. It only required a little persuasion to get the brackets on securely.

I turned the shelf up on its end and covered the metal bracket with a rag before gently tapping it with my hammer side to side to ensure it was entirely flush. 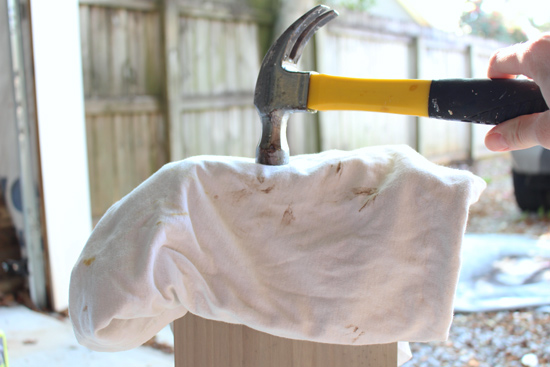 Then I attached the shelf to the bracket using the included screws.

To attach them to the wall, I used a stud finder to locate my studs. And since my shelves were 24 inches long, only one bracket would happen to land on a stud. So I picked up these large drywall anchors for the other screws. 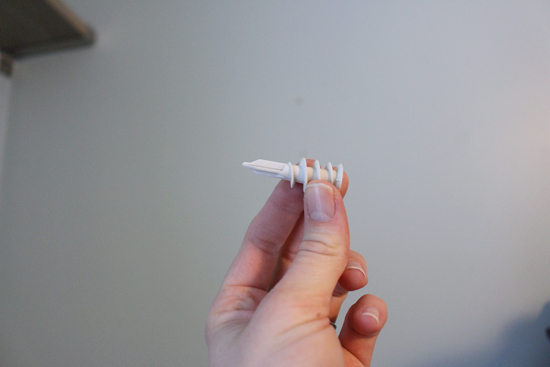 As big as they may be, the bracket would cover it up once it was all said and done.

I started with the top shelf and worked my way down. First, I held it where I wanted it and marked the bottom of the shelf. Then on the adjacent wall I marked 8 inches down, making my shelves 8 inches apart. I repeated it again for the third, and final, shelf. 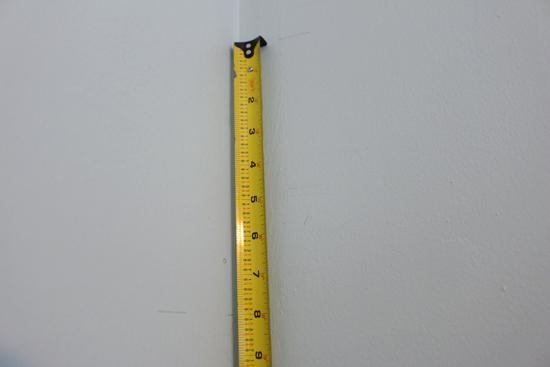 Once I liked the layout, I held up my top shelf again, checked for level, then marked the holes in the bracket on the wall. 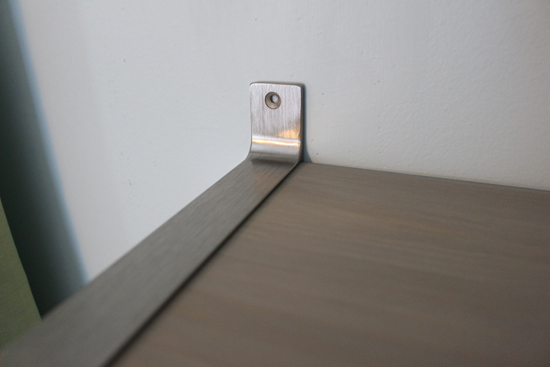 I inserted my anchors where there wasn’t a stud, then attached the brackets using all 4 holes (one on each bracket on the top and bottom). I had to pick up some 2″ (#8) screws at the hardware store since these brackets don’t come with any.

12 screws later and my shelves were complete and ready for baby boy tchotchkes. 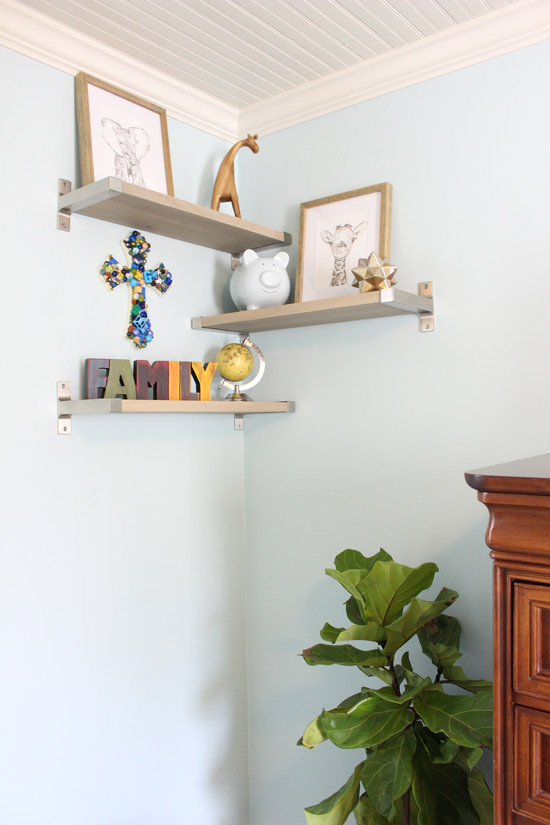 For your reference, it’s easier to decide on the height placement of your shelves if you have someone holding it up while you look on. I, however, did not want to wait for someone besides a 2-week old to help. So they’re a little higher than I would have originally liked. BUT I think they’ll end up being perfect since the plan is to add some sort of changing table in this corner eventually…Hopefully before he’s potty-trained! 🙂

And pardon the grainy, dark photo, but I thought my little man just looked too cute in his sleeper not to share! 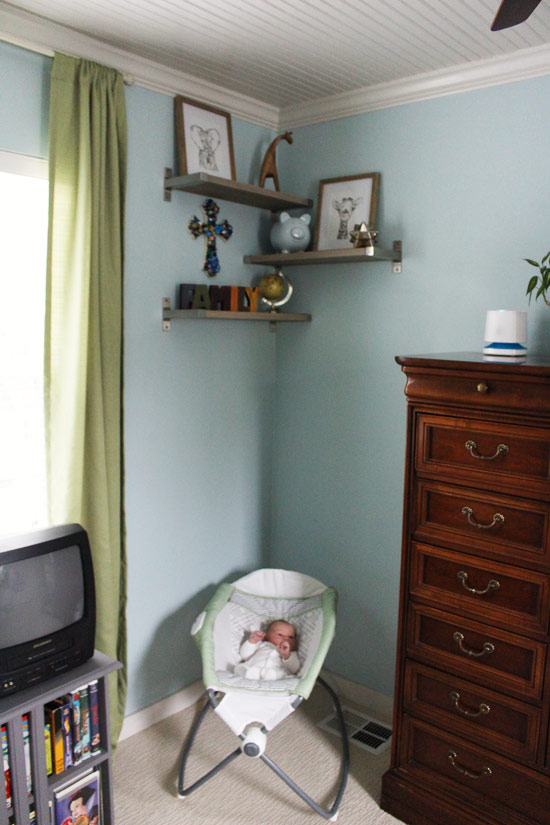 Besides hanging a few frames as part of a gallery wall, there’s only one more project left in his room. And that’s building a window seat on the opposite wall. It’s the feature project in my next webisode being posted on my blog March 1st! It was fun times with my dad building it for my little man a few months before his arrival, so check back in on Wednesday for that how-to video!

Until then, Happy Mardi Gras! Thanks for Checking In! ~Chelsea