A few months ago, I was picking up a file cabinet from our local Habitat for Humanity ReStore for an episode project. (If you don’t know what that is, you should check to see if there is one in your area for great furniture and building material finds!) While there I saw this round end table for $7! 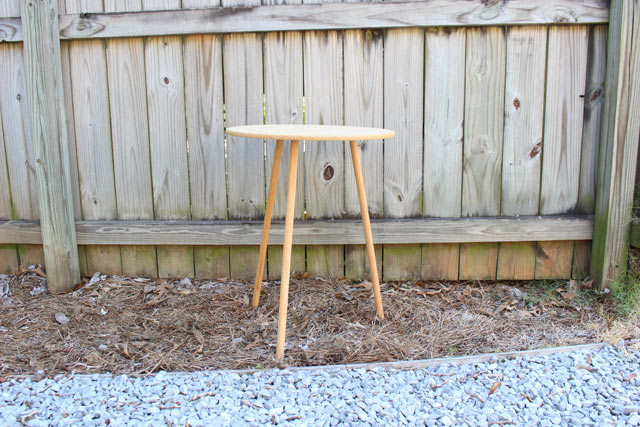 So I took it home with me too! I later found an exact match at a local Goodwill for $5. Could have saved $2!

It had nice, wooden legs, but the top of the table was very unfinished. It almost looked like it could have been cork. 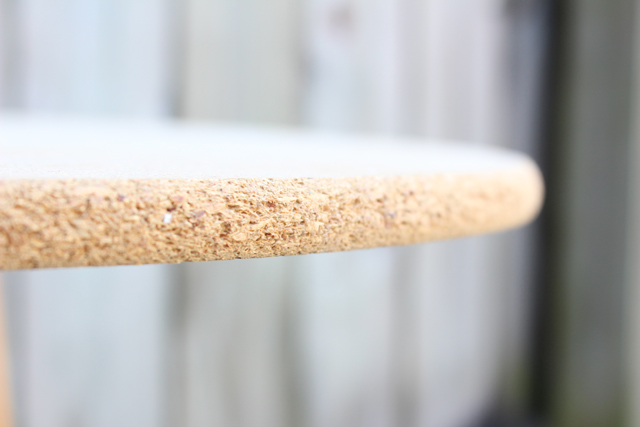 I knew I could refinish it and make it look great. It was just a matter of coming up with the right something. Then I found some marble contact paper on the web-giant Amazon. (Here’s a link to what I purchased if you’re interested.) 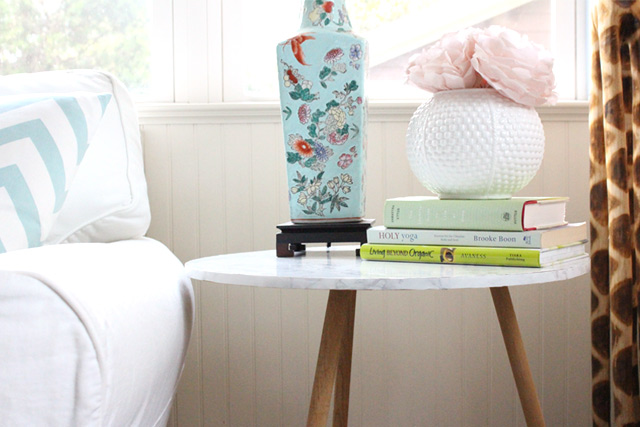 The hardest part was cutting the paper in a strip for the side, but even that wasn’t so bad. Here’s what I did.

First I started by rolling out the contact paper and turning the table upside down on top of it. I placed it in the middle of the paper so I would have 2 factory edges to work with when it came time to cut strips for the edge of the table. The paper doesn’t unroll very smoothly since it’s kind of thick, but don’t worry about the wrinkles. They’ll come out! 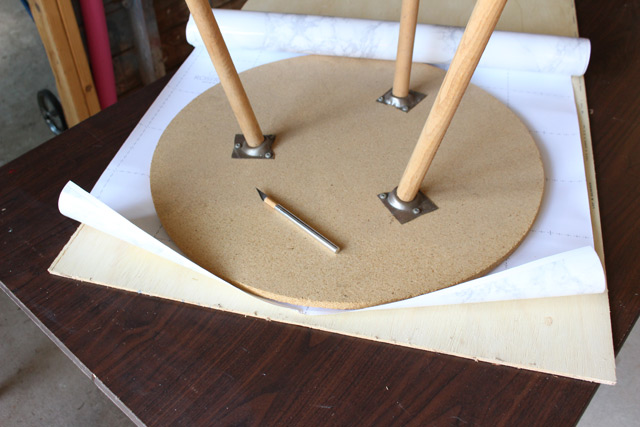 Then I used a knife to cut out the table top. At first I used my X-acto knife, but quickly switched to a sharp box knife that worked even better. You could also trace the table top with a pencil and cut it out using scissors. I thought using the knife would yield better results, but since I didn’t do it the other way I really have no way of knowing for sure!

After removing the paper backing, I applied the circle to the top of the table. Here are some of the wrinkles I mentioned not worrying about… 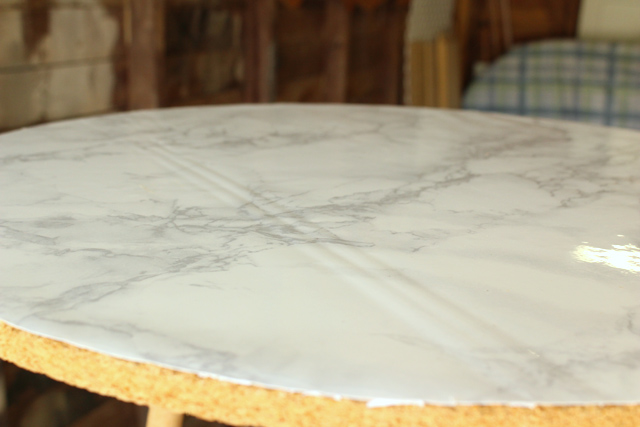 Before I smoothed out those wrinkles, I applied the strip on the edge. I measured the width and length and then marked that on the edge of the contact paper using a yard stick as a straight edge. 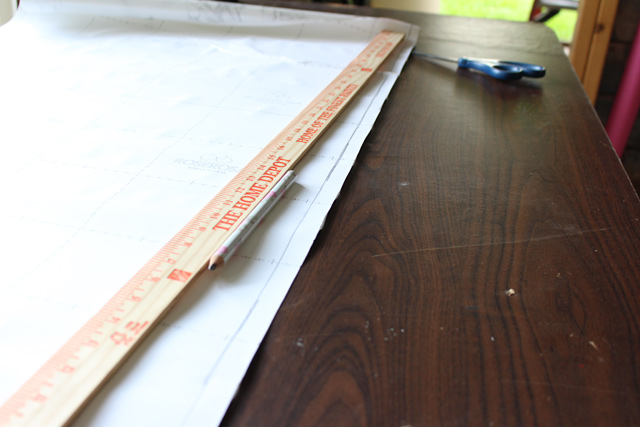 I used old-fashioned scissors to cut it out. Fortunately my table was small enough that I was able to use one continuous strip. If yours is larger or you’ve got a shorter roll of paper, just cut 2 or more strips of the same width. You can always turn the table to hide the seams!

To apply the strip, after removing the paper backing, I lined it up at the top before smoothing it down and then around the whole table. The contact paper can be unstuck and reapplied if needed. Of course the more you do it the less sticky it will be!

After my “new” table was covered in marble, I used a drywall knife to smooth out the wrinkles and make sure everything was stuck to the table nicely. You can also use a fine fingernail file to smooth out any strings on the edges. 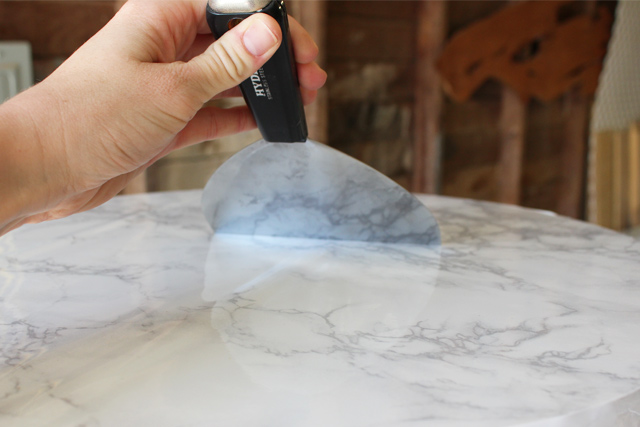 Since the legs were in good shape and I liked the color, I didn’t do anything but wipe them down. 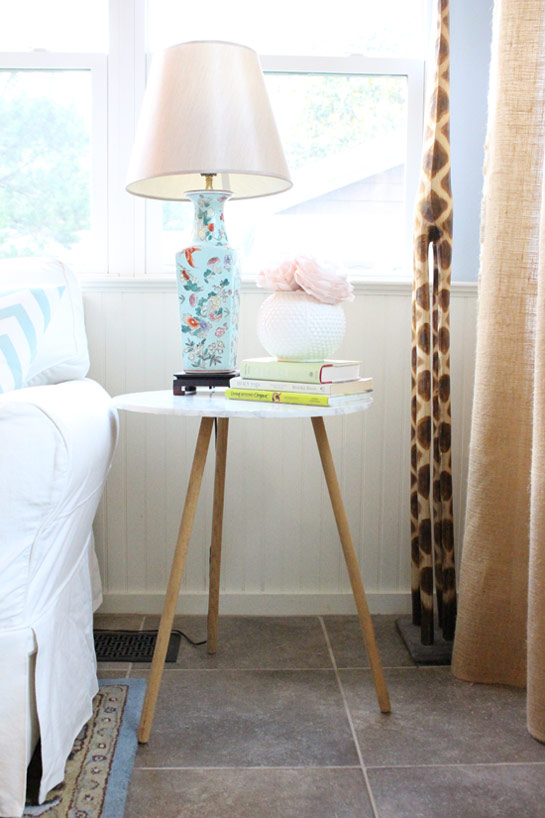 The shine of the marble paper is genuine-looking. I also thought it’d be great for shelves in a bookcase, whether built-in or stand-alone. 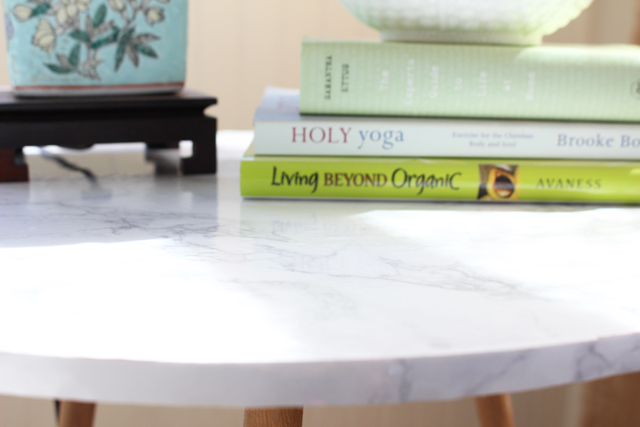 Some people have even covered their countertops in this stuff. Now that’s something I’d have to see in person to even consider!

Happy Father’s Day to all the dads and dad figures out there! Thanks for Checking In! ~ Chelsea 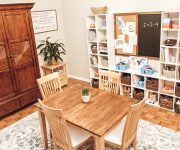 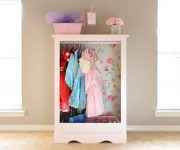