You are here: Home / Indoor Projects / …and the First Power Bill

If you’ve never lived in Mobile, Alabama, during the summer (March-October), it can be pretty brutal on your sweat glands, air conditioner, and makeup. Granted I’ve lived here my entire life, but I’ve never had to pay an electric bill before. So the first month I lived in my house, I kept the temperature cool when I was home, slightly warmer when I was sleeping, and even warmer when I was gone. I turned it up when I left in the mornings for work and down when I got home in the afternoons. I was feeling pretty good about my energy consumption, seeing as how I like to be warmer than the average human anyhow.

Then one day I was innocently checking my email. I had previously signed up for paperless billing for all of my utilities. And on that fateful day in June, there was a new message in my inbox from Alabama Power. Anxious to see how much I was in for, I signed into my online account and clicked on the latest billing cycle. My heart sank when I saw the $220 price tag on my comfort for the previous month. $220 to keep an 1100-square-foot home semi cool for a month. I thought I was doing everything I needed to be “energy efficient,” but I guess there’s always something more you can do.

Having been around my dad’s TV show and his other projects concerning energy efficiency, I was well versed and knew what to do. I started with my 70-year-old metal windows, which were basically giant holes in the side of my house pouring out my precious, and expensive, cooled air. I bought a nine pack of window insulation film for about $12.

I’ll be the first to admit it’s not the most attractive option, but boy did it work! The window insulation kit came with double-sided tape and the plastic film. My window openings were a little odd, so I wasn’t able to seal the film 100%, probably only 90%. (After you apply the tape and plastic you “seal” it with a hairdryer).

At the same time I bought the film, I also invested in some magnetic pads for my floor registers and a programmable thermostat. The magnetic pads were used in two of the rooms in my house that I kind of inadvertently made storage rooms. My sunroom had two A/C vents (floor registers) and my “office” had one. I decided to effectively closed off those vents with the magnetic pads and keep the doors to those rooms closed as well. That way the air would be redirected to the rooms I actually used, and there would be less square footage being cooled.

The programmable thermostat was really just a back up to what I was already doing manually. But I wouldn’t have to remember to turn the air up when I left because it was already programmed to a certain temp at a certain time of day. I also increased the “away” temperature by a few degrees.

My fingers were crossed for the whole next month. Would my bill go down? It was getting hotter outside, so there was a chance it would only stay the same. Just please don’t be any more expensive!!!

*Bing* New message in my inbox from Alabama Power. Due this month: $150! That’s right, $70 less than last month with only $30 invested. I’d call that instant savings! I was beyond thrilled and knew that as the weather cooled off, so would my power bill. And happily (for me and my virtual checkbook) my power bill continued to decrease each month into the fall, when it was time to revamp my fixer-upper and turn it into a remodeled home.

Read more of my musings as a first time homeowner in my next blog-from first power bill to exterior facelift (on my house, not me!) 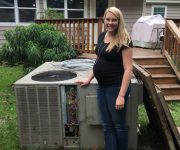 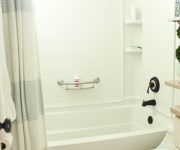 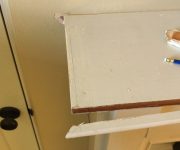 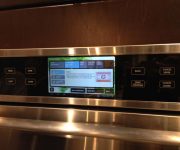