You are here: Home / Indoor Projects / Styling and Profiling

Ever since my husband, Brandon, started moving his stuff in a month or so prior to our wedding (in March of this year), I’ve been wanting to declutter the bookshelf in our office/gym/craft room. He doesn’t have a lot of material things, but he has plenty of books! 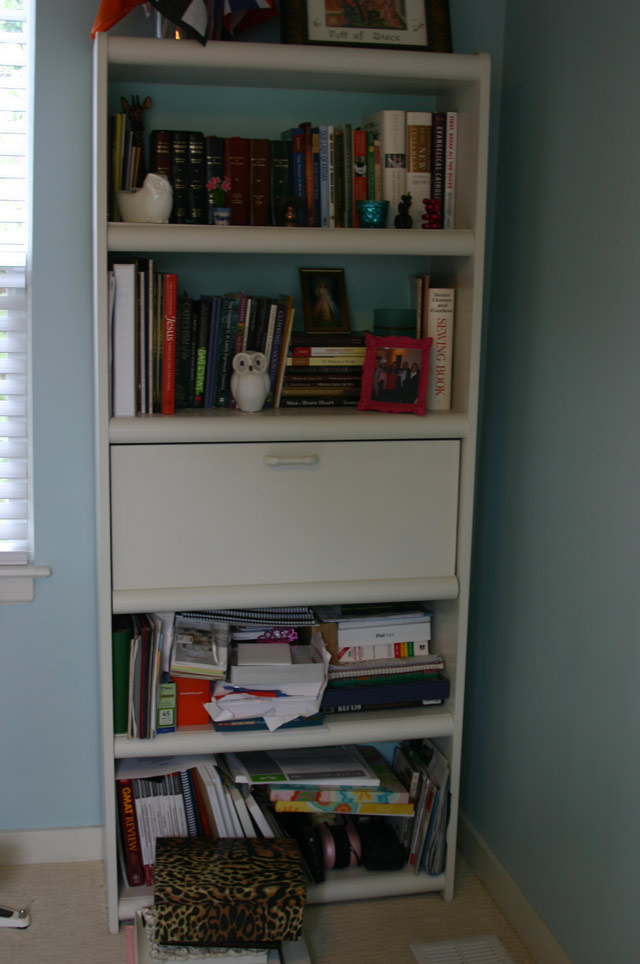 I wanted to “style” the bookshelf so it looked pretty and magazine-worthy, but I soon learned that would require getting rid of a lot of said books. So instead, I did my best to reorganize what was there and make it more functional and a tad more attractive. 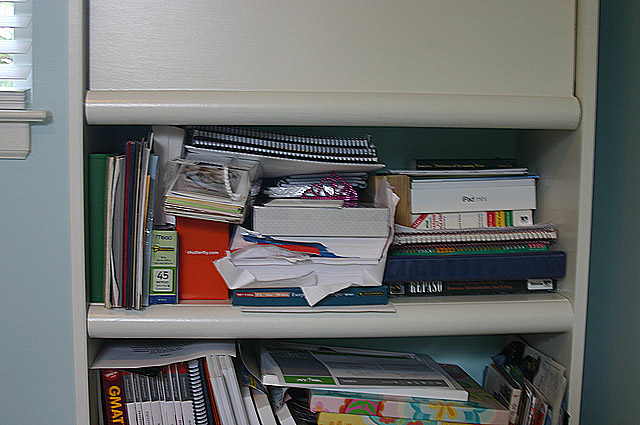 In addition to all of the books, I have started collecting items on the bottom shelves for a future gallery wall. My collection quickly outgrew the shelf, so I had a bunch of frames just sitting on the floor… 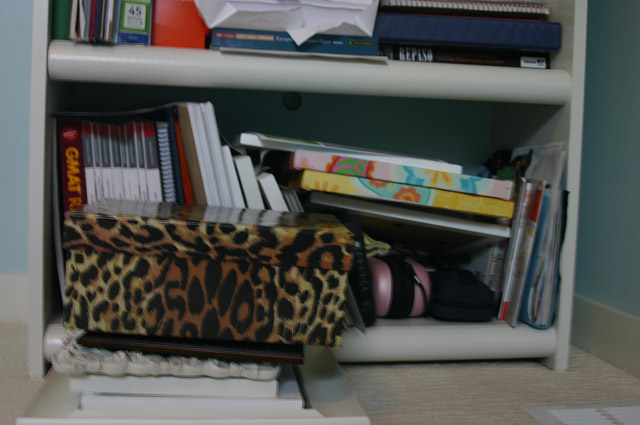 So the frames were the first thing to go. I put them in the nearby closet, where I store my crafting supplies, that had an underutilized shelf way up high. They should be good to stay there until I find a place to hang my hypothetical gallery wall, since this is a bonus room for us. 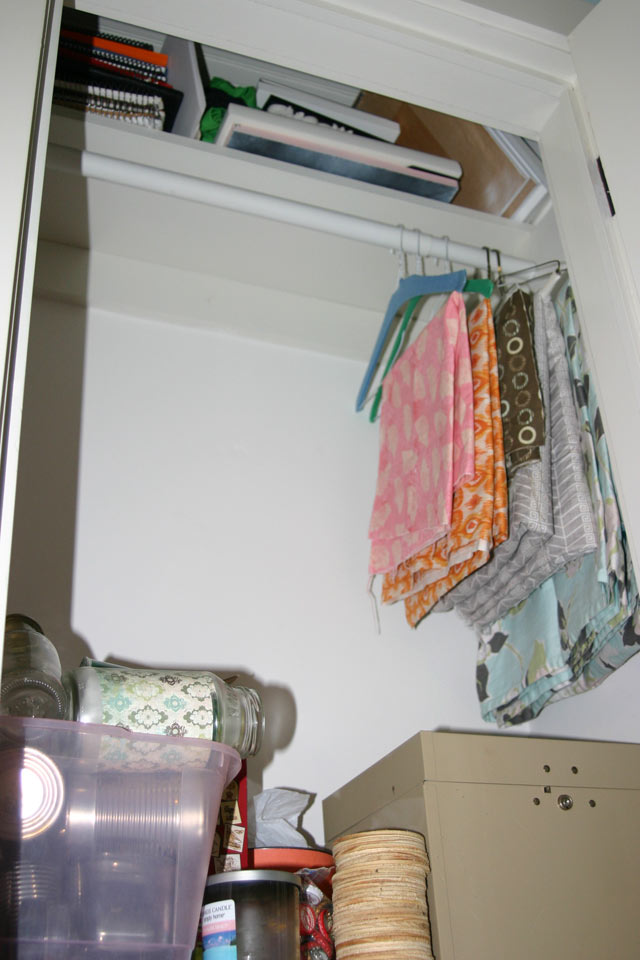 With the frames out of the way, I removed everything else from the lower shelves and started with my favorite thing when organizing, piles! I created piles for things that would be finding homes elsewhere. I had a trash pile, a recycle pile, a “bring to work” pile, a Checking In With Chelsea set decoration pile, a pile for Goodwill, and, last but not least, a pile for my “memento” box in the attic. 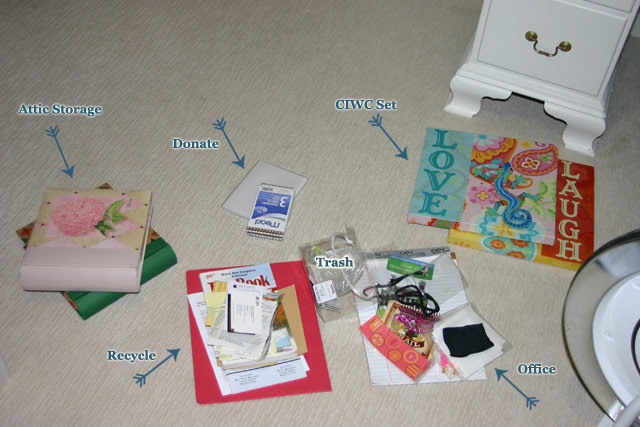 I knew I wanted to add a few baskets for a cool visual as well as hidden storage. So, I found two baskets in the same style, but different sizes. One wider, but lower profile. And the other was tall and skinny. 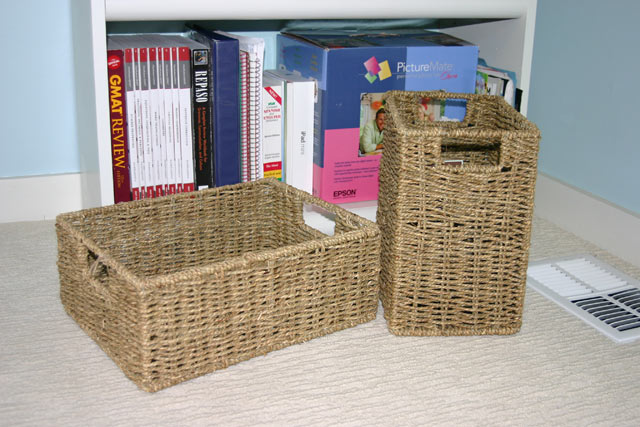 I put all of our various envelopes and notecards in the short one so they’d be easy to access. In the tall one, I put old Spanish and Italian classwork and books. Apparently Brandon and I both think we’ll someday pick up where we left off in college and become fluent in a foreign language. He studied Spanish and I took 2 semesters of Italian. Somehow I doubt that will happen, but we’ll still hold on to them…just in case… 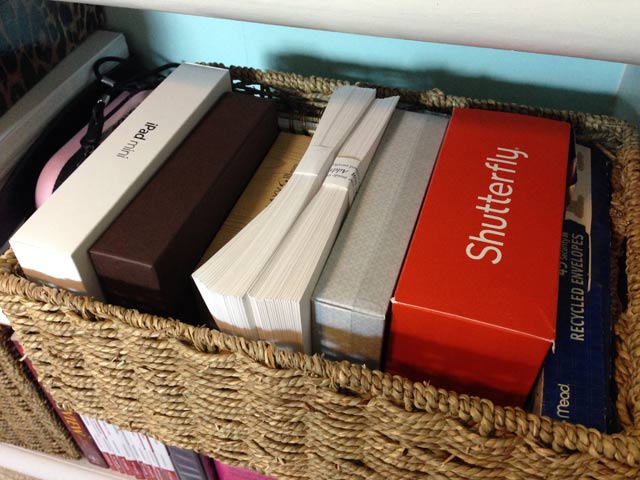 It went unnoticed until I was clearing the shelves that we had 2 opened packs of printer paper, which can be very unsightly! To correct that I bought the cheapest tray I could find. It’s black plastic, but I knew it’d be easy enough to spray paint a more desirable color. But once I put the paper in and placed it on the shelf, you can hardly see the black. Not worth the effort of painting, that’s for sure! It will be nice to use up a little of the paper though. Then we can keep less of it in stock. 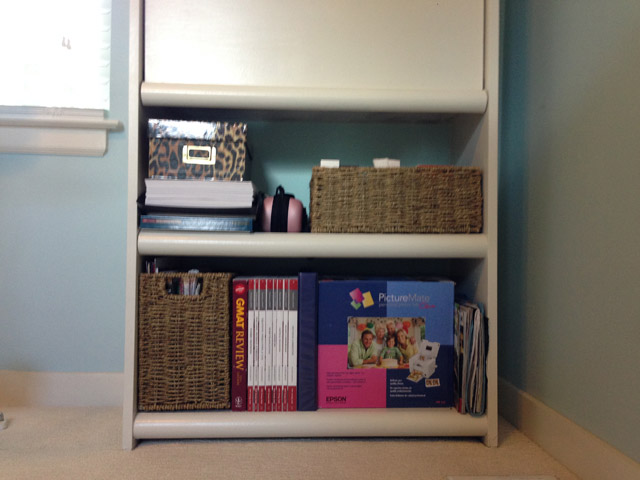 The baskets were put on different shelves on opposite sides to balance the look. And then I filled out the remaining shelf with the rest of our “stuff”. On the bottom shelf is the basket with textbooks, some other textbooks, the photo printer from our wedding photo booth, and my “travel” folder where I keep magazine tear-outs of neat places to visit in various towns. 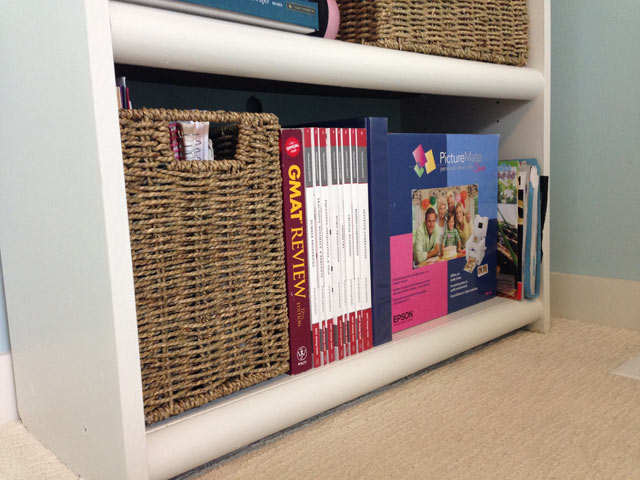 The next shelf up has a box of specialty resume paper, our new printer paper tray, a re-used leopard print box with old photos and photo CDs, my beach-proof iPod player, and the basket with envelopes/notecards. 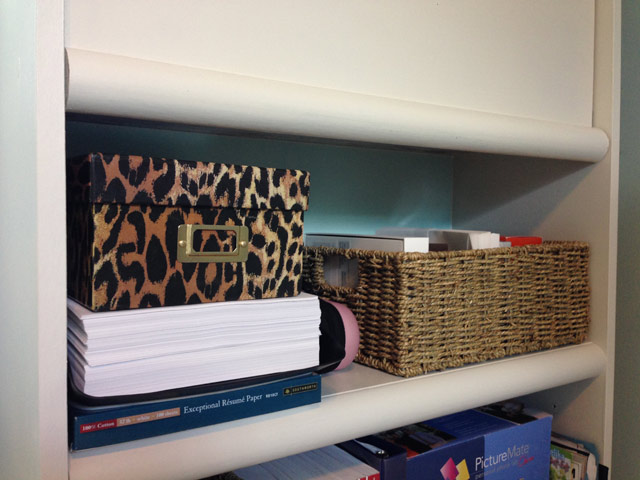 On the hidden cabinet storage shelf, I put our DSLR camera and case, extra notepads and sticky notes, colored markers, and other random office supplies that aren’t the prettiest. But it’s certainly a lot more functional than it was before! 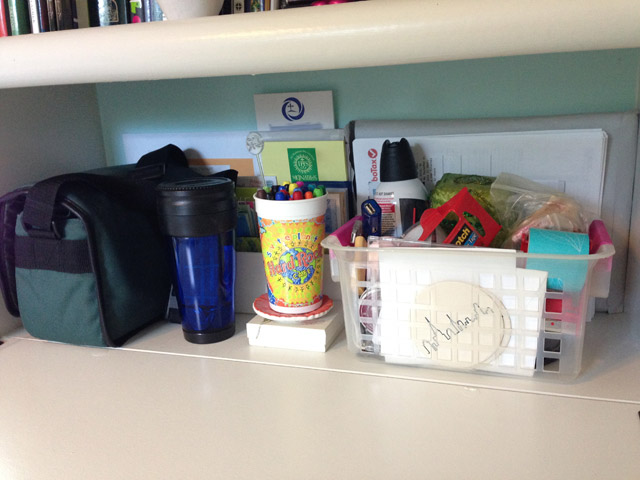 And unfortunately, I didn’t have any help to offer the top two shelves. So they are left just as you saw them in the before pictures. But I have an idea of a bookshelf to build for our sunroom that will be able to relieve some of the book-storing tension in this house. Stay tuned for that in the next few months. 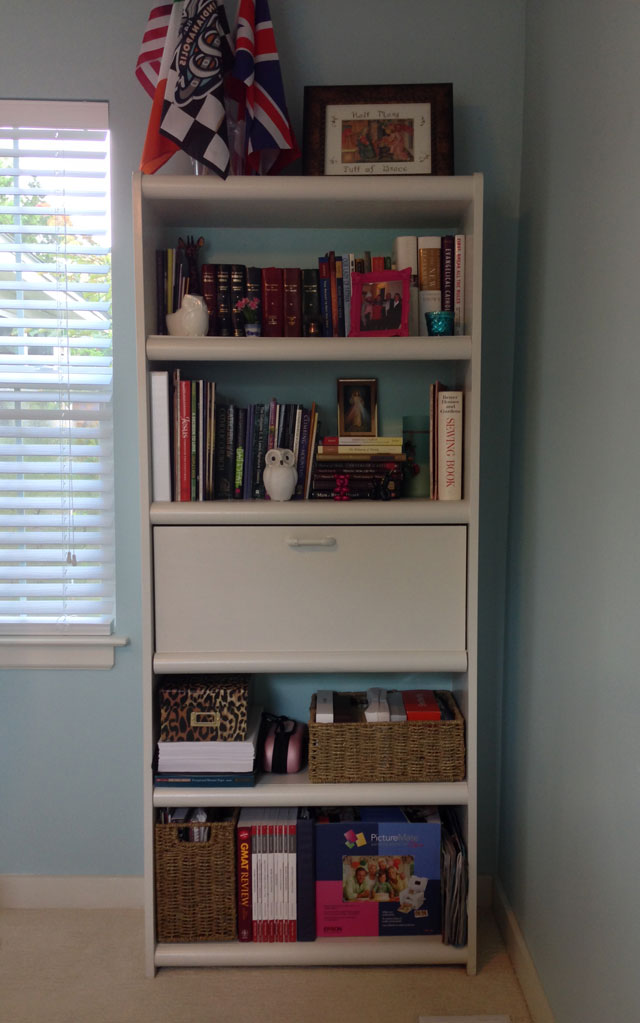 This isn’t my first post, and probably won’t be the last, of dealing with the merger of two households and all of the duplicate stuff that comes with it! I had to build a Closet Door Caddy for the hall closet to contain our toiletries! And the rest of our closets are bursting at the seams! But I mostly blame that on this older home of ours and its tiny closets.

Anyone else desire magazine-worthy bookshelves? And I’m really hoping some else understands the plight of small-closet homeowners! I can’t be the only one struggling with new husband/small closets/lots of stuff syndrome. Comment below and let me know!