You are here: Home / Indoor Projects / How Not to Refinish Your Dining Table

How I Refinished Our Dining Table:
The Good, The Bad, The Ugly 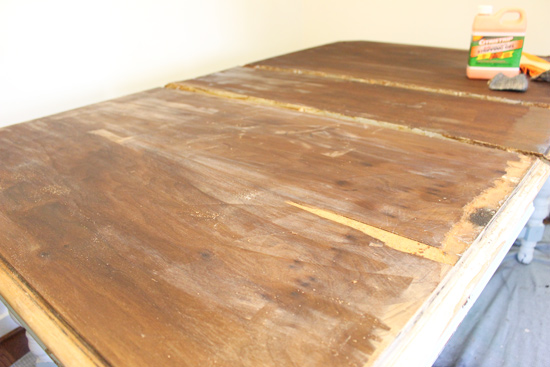 I’ll warn you. This doesn’t end the way I wanted, but I think it’s a story and how-to worth sharing. Learn from my mistakes.

It all started innocently enough. I love the look of naturally-stained dining tables with painted legs. And since our painted dining table top was looking a little rough, I thought I’d give it a go! 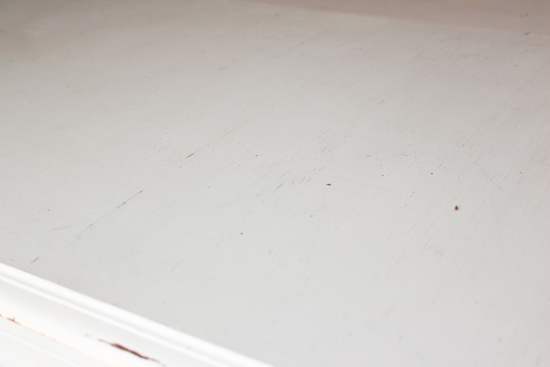 We started by painstakingly sanding ALL of the paint off. (*Spoiler-Much to my husband’s chagrin, this would prove fruitless in the end.) Once the paint was removed, the tabletop was still darker than I wanted.

I sought out to remove what I thought was stain, so I could re-stain it with a lighter stain. I picked up some CitriStrip* which I’ve used before to strip stain off of wood furniture with great success. 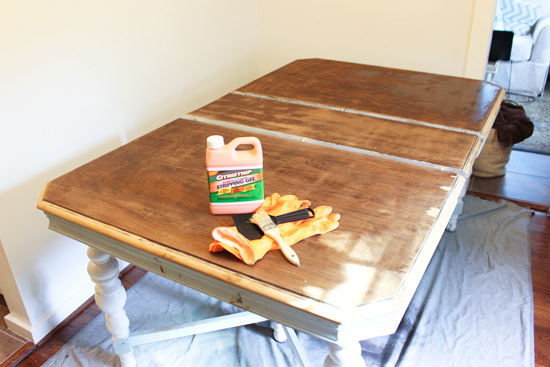 Instead of moving the table outside, I worked on it in place with windows open and a drop cloth on the floor. I poured a little out and then spread it evenly with a cheap brush. 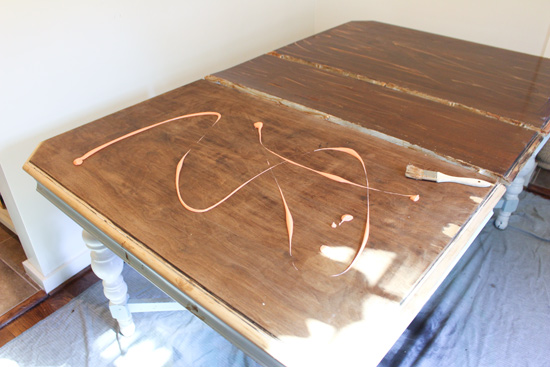 Following the directions, I let it sit for a few hours before scraping and cleaning the gel off with a plastic putty knife. This is where things started going down hill.

First of all, as I was removing some of the strip gel, I accidentally tore off a piece of what I came to realize was veneer, leaving a chunk in the top. Sure I could have filled the void easily enough, but it never would have matched the color of the existing wood around it.

Second, no stain came off with the stripper. Determined as I was, I applied it again and waited even longer before scraping it. Still to no avail.?

I slowly started realizing my dream of a light-stained table may not be coming true…but this saga doesn’t end there. Nope!

I thought “Oh I bet there is a nice top under this wood veneer! I’ll just strip it off and if it doesn’t work out, I’ll apply a new veneer that I can stain! Yeah! This will be great!” Note to self-no one would put a veneer on top of a nice table top…

After a little research, I learned that a little bit of moisture can loosen the glue that holds the veneer in place. So I got one of our rag towels wet, wrung out the excess water, and let it sit on the veneer for a few hours. 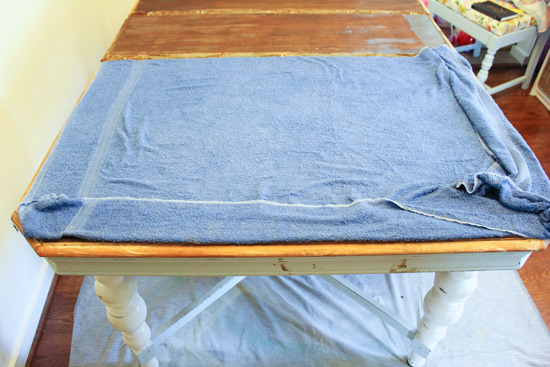 I checked it every so often by trying to scrap it up with my plastic putty knife. Once it was saturated well, it came off in sheets. 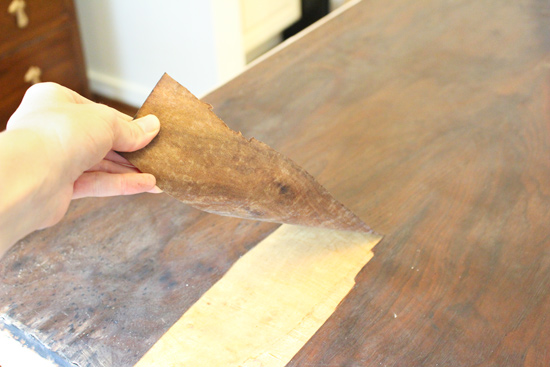 This whole dining table refinishing project was a process spread out over a year. So a few details are a little fuzzy. Like I’m pretty sure as I was removing the veneer, I accidentally went too deep and started removing a second layer of veneer. Therefore, I had to finish removing a whole second layer once I was done with the first. Another unexpected step in this process! At least the damp towel worked well! 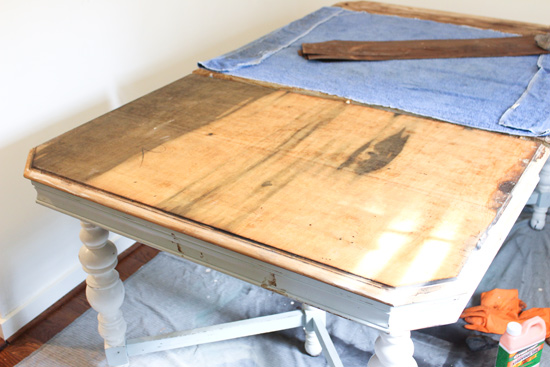 If you’re picking up on my subtle disappointed hints, the tabletop was not in a condition that one would want to stain after removing the veneer(s). Furniture makers put veneers on pieces that are made up of smaller pieces of not-as-nice wood. My table fit in this category.

It was light! Yay! But most of the wood had lots of green tones and the boards were going in multiple directions. 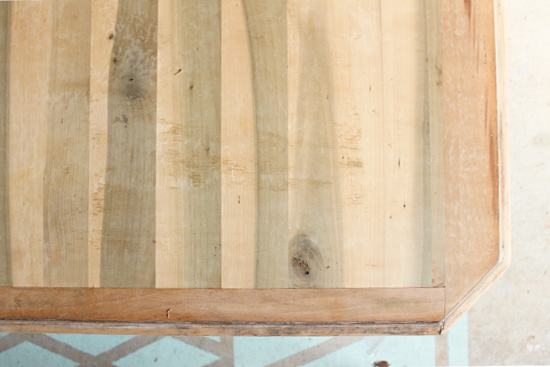 At this point I finally let myself realize that I would be disappointed if I attempted to stain it the way it was. I also realized that re-attaching new veneer required special machinery to do it well. And to buy a piece of veneer large enough for my table would cost more than I wanted to spend on this project. So that was (pardon the pun) off the table.

After all of that work, it was time to paint our table again. Back to square one.?

I started by priming the whole surface with a regular water-based primer. That exposed several cracks and flaws that I then filled in with my all-time favorite wood putty*. 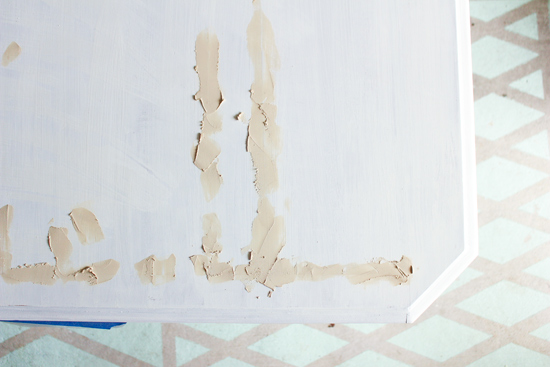 I always like to overfill the cracks and then sand it level once the putty dries. Basically I’m over this whole table at this point and have decided to sell the whole set (for more reasons than just the anxiety it has given me), I just need to paint it and spend as little time doing so as possible. So I mixed up a water-based stain with some white paint I already had on hand. 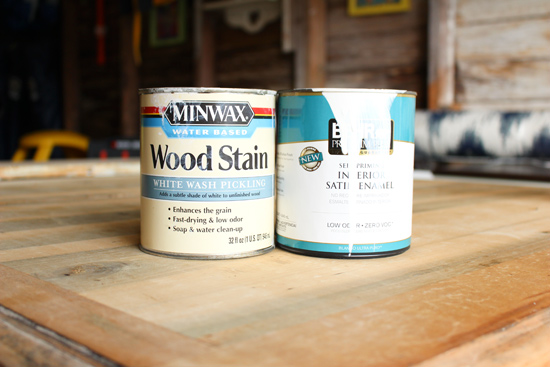 I wanted to use my paint sprayer but I wasn’t sure how it would work spraying downward onto the tabletop, so I propped up the table with my kids’ bench. 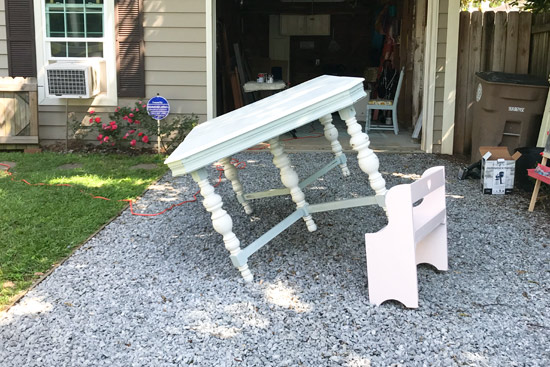 After two coats had dried, I quickly brushed on some water-based polyurethane to seal it and prevent the white paint from yellowing. 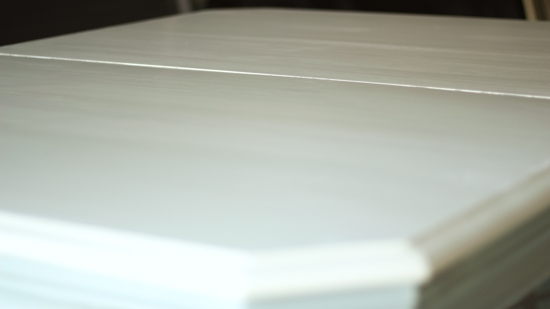 Now is probably a good time to mention that the steps I took in this process are not wrong on their own. Like stripping stain with Citristrip is a great solution. If you actually have stain to remove. It was just a wrong time, wrong place scenario for me across the board.

It was with great rejoicing when I listed the table for sale on Facebook Marketplace or VarageSale and someone came to pick it up and gave me money for it! Of course I could never be repaid for the love, sweat, and (almost) tears poured into this project. But I’m just glad posting this how-to will be the last time I see this lovely specimen of a dining table.

I’m also glad to share this table saga in hopes of sparing just one of you from the same fate.?Let me know if you have a furniture makeover saga in the comments so we can commiserate together! Ha!